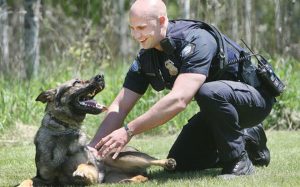 A resolution headed to the Duluth City Council on Monday could put to rest a lawsuit filed by Teri Lynn Ehlers, an employee of the Patch Motel, who was bitten by a Duluth police dog named Oakley. Former Duluth Police Officer Marc Johnson was a registered guest of the Warroad establishment May 28, 2018, when his K-9 partner, a German shepherd, bit Ehlers in the leg.

According to the suit, Johnson was staying at the motel with his father, Richard Johnson, who had booked the room, indicating that they would be accompanied by a “service dog.” The Patch Motel has a no-pet policy but provides an exception for dogs that are trained to help people with disabilities. The suit said Oakley was not identified as a K-9 police dog.

The complaint said that around checkout time, “Ehlers was making the rounds on housekeeping duty with her supervisor, and the pair approached Room 144.”

Ehlers reportedly found the door ajar with no “Do Not Disturb” sign displayed. Ehlers said she knocked on the door, received no response and then proceeded to open it.

The lawsuit asserts that Ehlers did nothing to provoke Oakley, but said that “in an instant, K-9 Oakley attacked Ehlers, who was still standing in the hallway of the motel.”

The dog allegedly lunged, latched onto her upper-right thigh with its jaws and would not release her, despite her cries of pain, until Johnson intervened.

Ehlers sued the city of Duluth and Officer Johnson on two counts of strict liability. For each of the counts, she sought at least $50,000, plus expenses.

In a legal answer to the complaint, the city acknowledged the dog bite but alleged that Ehlers provoked the dog and that her “own negligence, acts or omissions caused or contributed” to her injury. The answer also maintained that the city and Officer Johnson were protected by “the doctrine of vicarious official immunity.”

The pending settlement agreement contains a disclaimer saying that it “is in compromise of doubtful and disputed claims.” It also says the payment “is not to be construed as an admission of liability on the part of the persons and entities hereby released, by whom liability is expressly denied.”

After 12 years of service, Johnson left the Duluth Police Department on May 9, 2019, and his K-9 partner, Oakley, was retired from service as well.