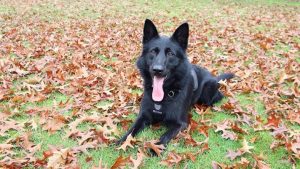 A Vancouver police service dog was injured and officers assaulted while responding to a report of a man trying to steal a marked police car from a secure yard early Monday morning.

Vader, a member of the VPD canine unit, suffered a broken tooth and swollen mouth when the 66-year-old suspect kicked and punched him. The suspect also fought the police officers who suffered minor injuries.

“Vader courageously apprehended the violent suspect and hung on while the male kicked and punched Vader in the face, while holding the stolen keys in his fist as a weapon,” said the VPD canine unit on Twitter.

A city staffer called police to the secured City of Vancouver National Yards in Strathcona at 6 a.m. where the man was attempting to steal the vehicle.

Roed said the man was also arrested on Sunday in Stanley Park for uttering threats. He was taken to jail but then released on an undertaking to appear with conditions.

He is now in a local hospital awaiting assessment.