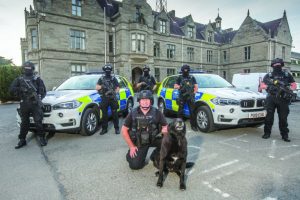 When not busy catching baddies, police dog Buzz recently found time to stand to attention and bark his thanks outside Coventry’s hospital during the Clap for Carers, reducing some of the nurses present to tears.

That noble vision sums up the dedication, heroism and compassion of the Warwickshire police dog section.

Newly liberated from its ties to the West Mercia division, the WPD is making the most of its fresh start, with new dogs being trained and even establishing its own Twitter account.

The section consists of ten human handlers, who usually look after one or two dogs.

“Every handler has a general purpose dog, which is a big dog, some of which are trained to work with firearms teams – they are called firearm support dogs.

“Generally, the big dogs look for criminals, missing persons, and search for people who have run off crime scenes or burglars hiding in buildings etc.

“They will look for disgarded items, such as weapons at a crime scene or property that’s thrown from a burglary. The dogs will identify people’s scent on items and show the handler where the item is – like thrown into a ditch, or wherever it might be.”

During the coronavirus pandemic, Sgt Rawson says they have also been busy helping people to understand what the lockdown rules are and how to abide by them.

He added: “Unfortunately there’s still a criminal element that are busy.”

As well as the big dogs, which tend to be German shepherds or a hybrid (Buzz is a German/Belgian shepherd mix), most handlers also have a specialist search dog – usually spaniels.

Sgt Rawson said: “All dogs are good at sniffing things out but obviously it’s difficult to hold a German shepherd at head height. Size-wise, if you have a spaniel they are easier to handle if you’re searching for explosives, drugs or firearms.”

As well as big dog Buzz, Sgt Rawson now has black-and-white springer spaniel Bella, who is seven months old and especially adorable. Is it hard not to treat them like pets and become attached to them?

“As I spend more time with the dogs than the wife, then you do get very attached,” explained Sgt Rawson, whose dogs live with him at home but sleep outside.

“But they are not pets, but service dogs, and you work as a team. Ultimately they are there as a tool to do a job, and will if necessary save the life of their handler or a member of the firearms team. You have to judge the risk against the tactics to do the job, and ultimately if they have to save a life, a dog must do its duty.”

Sgt Rawson has been in the force for 27 years, joining WPD five years ago after working in traffic and firearms divisions. What’s required to be a good dog handler?

“Obviously you have to love animals. Everyone else hangs up their keys or their gun when they go home, but these dogs live with you and they need looking after every day of the year. You also have to have the right mindset – the desire to go and catch bad people.

“The animals are tools, like a Taser or any use of force, so you have to justify its use and have that presence of mind to remain calm in any situation.

“You have to be able to work a dog efficiently and effectively before you deploy it on anybody – they have 42 teeth and will cause damage. Most of the time, just because of the size of the dog’s bark, the subject will perceive the risk and behave themselves.”

Sgt Rawson added: “After 27 years, my ability to catch people on a straight chase has been reduced! To catch a 20-year-old in trainers as I approach 50, it’s easier to have a dog!”