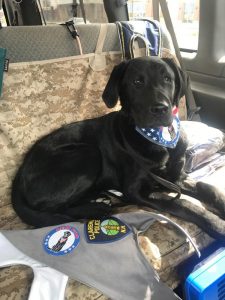 The Claremont Police Department is expanding its K-9 force, adding a comfort dog to the roster.

The Stratham-based non-profit, Hero Pups, is working with the department to train a rescue dog to serve as a comfort dog. Comfort dogs have become popular among first responders as they can help people dealing with the immediate effects of trauma.

“Our comfort dog’s responsibilities will include supporting victims of all crimes, engaging with families and children during difficult times, and being a resource that the community as a whole can access,” Police Chief Mark Chase said.

Chase said he first encountered Hero Pups at a charity event and learned that the organization pairs venerates with trained rescue dogs.

“We met them at a CHaD Hero baseball game last year and started up a relationship,” Chase said.

Hero Pups has supplied comfort dogs to Concord and Manchester, and has a program to have prison inmates train dogs. Laura Barker, president of Hero Pups, said the organization gives out about 20 dogs a year.

Barker has been working with rescue dogs her entire life, but got started training comfort dogs for veterans after seeing what the dogs could do for soldiers dealing with injury. She was visiting a relative who had been shot in Afghanistan when a therapy dog entered the room and approached another injured soldier.

“I could see the way this young man reacted, and his whole demeanor changed,” Barker said. “I was like, ‘My whole life has been leading up to this moment,’” Barker said.

The connections that the dogs make help people dealing with stress and trauma, whether it is for victims of violent crimes, veterans dealing with war wounds, or first responders who are susceptible to post traumatic stress disorder and depression, she said.

“These dogs are like a key that unlocks a door that sometimes has been sealed closed for so long they didn’t know it was a door anymore,” she said.

Claremont’s dog, a black Labrador-mix already has a sibling, Patch, getting ready for the Manchester Police Department. Barker said the dog has some more training to get through, but should be in Claremont within the coming months.

Chase is asking residents to vote on names for the dog, with Sarge, Sullivan, and Goose being the leading candidates. The department plans to live stream the name announcement on its Facebook page on Friday at 1 p.m. following a demonstration by Claremont’s current K-9, Maverick.