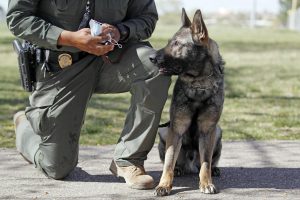 Two new officers at the Santa Fe Police Department have special skills that set them apart from others on the force.

They can quickly track suspects, have a heightened sense of hearing, and can detect the odors of narcotics and explosives.

After a seven-year hiatus, the Santa Fe Police Department has restarted its K-9 program with the addition of canine Officers Ayke and Azar.

Ayke, a German shepherd who came to Santa Fe from Germany, works with Officer Alejandro Arroyo, while Azar, a Belgian Malinois born in Los Alamos, is paired with Officer David Gallegos. Both are about a year and a half old.

After six weeks of training and bonding with their new handlers, Ayke and Azar officially began working in Santa Fe this week.

“I mean, we are still doing the patrol thing,” he added. “We also have to keep in the back of our mind, ‘Hey, we have the dog in the back. He needs to eat. He also needs to use the restroom, to be hydrated and cool,’ at the same time.”

The department’s K-9 program started in the 1970s, Deputy Chief Ben Valdez said, but ended in 2013 when the three certified canine handlers were either promoted or retired.

The department attempted to revive the program a few years later, but the command staff ultimately decided it was not the right time, and the money was allocated to other projects.

In the fall, Valdez applied for a federal State Homeland Security Program grant to cover the costs of the two dogs and training.

The total came to about $27,000, Valdez said, which will be reimbursed through the grant.

Annual costs of maintaining the K-9 unit are expected to be around $4,800 a year, Valdez said, which includes $100 a month for each officer and $1,200 for each dog’s veterinary bills.

Ayke and Azar both had some training before joining the department, but like any new police officers who are “fresh out of the academy,” they still have a lot to learn, Valdez said.

Ayke was trained in Germany for the nation’s police service dog examination, while Azar was training for sport.

They have been building their tracking skills and expanding on their obedience training, Arroyo said. “We introduced them to either narcotics or the [explosive ordnance disposal] stuff, the improvised explosives and all that, just depending on what the dog was going to be trained to do.”

Valdez said the dogs’ ability to detect odors will be a game changer for the department. Azar’s specialty is finding explosives, while Ayke focuses on finding narcotics.

The dogs will train with the department’s bomb squad and SWAT team so they’ll have the confidence to do their jobs in an emergency, Gallegos said.

Training the dogs never really ends — for the dogs or the officers.

The dogs — still puppies, despite their tough jobs — live with Arroyo and Gallegos, but they aren’t the officers’ pets.

“He comes out, and he looks like he’s Superman,” Gallegos said of Azar. “He’s intimidating and mean.

“But when we’re at home,” Gallegos said, “I look outside the window, and he’s doing circles inside his pen. He’s a pretty big dork, but when it comes to work … he’s squared away and ready to go.”