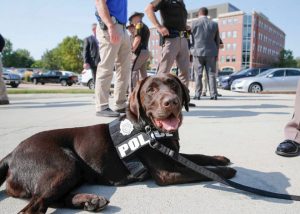 An Iowa Division of Criminal Investigations recruit is making an immediate impact in the fight against cybercrime.

Mousse, a female chocolate Labrador retriever, joined the Internet Crimes Against Children Task Force this spring after starting her life as a service dog with the national organization Paws With A Cause, according to a news release from the Iowa Department of Public Safety.

Operation Underground Railroad, a nonprofit organization that assists in the rescue of human trafficking and sex trafficking victims, donated Mousse to the Iowa task force. She’s the state’s first electronic detection K-9 trained for field work at search warrant sites, according to the release, and spends her days sniffing out evidence such as SD cards, thumb drives, external hard drives, tablets and cell phones.

“She is an absolute vital tool, probably almost a necessity for every ICAC around the country to have at least one in their unit to use during warrants, especially on a search warrant conducted, and no evidence was found on scene,” said Nate McLaren special agent in charge.

McLaren said youth-related cybertips submitted to the task force have increased more than 1,200% from 2008 to through July 2020.

“Cybercrime tips reached all-time highs of 274 and 284 in the months of March and April, respectively, at a time when school-aged children were idled with the pandemic,” McLaren said in the news release. McLaren also noted that special agents reviewed more than 98,000 gigabytes of evidence alone in March 2020.  Mousse assisted in the execution of six search warrants in June and July that resulted in four arrests and the rescue of three children.

Mousse was introduced to the public on Thursday during an open house in Des Moines and demonstrated some of her skills, which include such a keen sense of smell that she can find electronic devices underwater. During the event, the task force also showed off its mobile digital forensics laboratory, a vehicle specially designed and equipped to provide its agents an on-site setting where they preview electronic evidence.