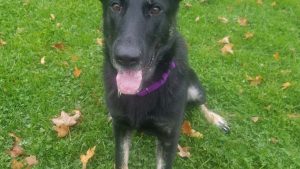 Thursday the Rotary Club of Mason announced a fundraiser to assist the City of Mason with launching a new K-9 program within the police department.

In September, Ingham County Animal Control transferred eight German Shepard dogs from St. Clair County Animal Control. The dogs had been rescued from a neglect/hording situation. Of those eight, one dog had the potential to be a working K-9, which the Mason Police Department had been considering for a number of years.

The female German Shepherd is mostly black and weighs about 55 pounds. Her exact date of birth is unknown, but it is estimated that she is a little older than when most young Shepherd start police K-9 training. She was evaluated by Mike Morgan, owner of Mid-Michigan Police K-9, LLC at his facility.

“He told me that he had absolutely no reservations about her potential as a dual purpose K-9 for the Mason Police Department,” said Chief Don Hanson. “In fact, if she had been evaluated in Poland, where he normally buys his dogs, she would have been selected.”

While her name at the time of rescue is unknown, the name “Tamarak” has been used at Ingham County Animal Control and while in foster care.

Hanson hopes that she and a current officer will be enrolled in Police K-9 School in the spring and will be trained in tracking and explosives detection.

“When this many experts all draw the same conclusion about a dog’s potential as a working K-9, I had to listen,” said Hanson. “But ultimately she will be a service dog to help our community.”

Every year in Mason, there are about 30-40 calls in which a dog could assist on the investigations including bomb threats, missing children or seniors, and tracking.

The program will provide an opportunity for professional growth for the handler, who will be selected after a comprehensive process.

In order for the program to be a success, no additional staff will be added to the police department, but a police SUV will be fitted as a dual-purpose K-9 and general patrol vehicle. The upgraded SUV would still be capable of transporting a person in police custody.

Due to uncertainty of finances available, Mason City Council will only authorize the adoption if funds are raised to cover the startup of the program, estimated to be $20,000, for minimal burden to tax payers. Local veterinarian, Dr. Main, agreed to provide routine care at no cost to the city.