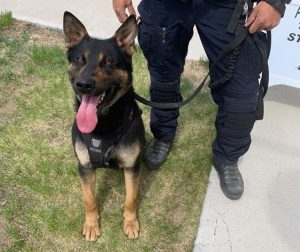 The Moose Jaw Police Service has a new recruit, but he’s of the four-legged variety.

“Merc” passed his validation testing last week and he is now the fourth dog to join Moose Jaw’s K9 Unit.

“Usually, that’s the proper protocol is that when an old dog retires a new one is brought in or when the service is increasing say dog power or canine handlers they will bring in other dogs and begin training from there,” said Cst. Jim Biniaris, who is Merc’s handler.

In many ways, this dog holds special meaning to Biniaris. The dog is named in honour of Cst. Jason Mercer, an 18-year veteran of the Moose Jaw police force who died on March 23, 2016.

Biniaris said he was very close to Mercer.

“Jason was actually my field training officer for the majority of my career and so we found it fitting that I’d get Merc as my police service dog,” he said.

The K9 Unit can be deployed for a number of different reasons. These include alarm calls, violent offences, scenarios where a suspect has fled the scene, searching buildings and vehicles and assisting in missing person cases.