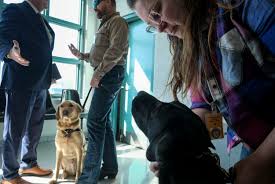 “Good People” profiles everyday individuals who are bettering the lives of those in need and improving their communities.

This organization is changing how prison inmates are serving time.

“Puppies Behind Bars” allows incarcerated men and women to train service dogs for the purpose of giving them to veterans and other heroes who need help.

Gloria Gilbert Stoga, the founder and president of “Puppies Behind Bars,” said she was first inspired to create the organization after reading about a veterinarian in Florida who recruited prison inmates to train guide dogs for the blind.

“I just thought it was an absolutely brilliant idea,” Gilbert Stoga told In The Know. “I just followed my passion to create a program where prison inmates train dogs that will go out and work in the community.”

Veterans who have been fortunate enough to receive dogs who have graduated the program have described the animals as nothing short of life-changing.

“When I talked to the VA about getting a service dog, I saw that ‘Puppies Behind Bars’ does work for trauma, for PTSD dogs,” said Col. Jeanna Meyer, a veteran and service dog recipient. “It’s pretty unbelievable, you kind of actually start to get the hope that life is going to be so much better now.”

Port Authority Police officer Brian Andrews, another service dog recipient, recalled being a highly active person until 2015 when he sustained an injury on the job that left him in a dark place.

“I basically crawled into a fetal position and spent a year and a half like that,” officer Andrews said. “This ‘Puppies Behind Bars’ program has brought me back to more pre-injury (status).”

As miraculous as “Puppies Behind Bars” has been for dog recipients, inmates have also touted the benefits of participating in the program, which Gilbert Stoga describes as rigorous.

“The training process for an inmate — it’s really hard,” the founder said. “There’s tests, there’s quizzes, there’s hands-on assignment. If you’ve raised a dog to completion, you feel pretty damn good about yourself.”

According to the organization’s website, puppies enter a prison at the age of 8 weeks and live with their inmate puppy-raisers for approximately 24 months.

“As the puppies mature into well-loved, well-behaved dogs, their raisers learn what it means to contribute to society rather than take from it,” the site reads. “The dogs bring hope and pride to their raisers, and independence and security to those they serve.”

All the hard work clearly pays off on both ends.

“It’s definitely something that’s positive and has lifted me up and helped me in ways I never thought possible,” said inmate and puppy raiser Rebecca Polomaine. “It’s like, ‘Here. Thank you.’ I put my love, my blood, sweat and tears into these dogs, and this is for you.”

“When everybody graduates, they go home with the dogs, were all rooting for them, and we’re hoping for optimal success,” Gilbert Stoga added. “The dogs have saved lives.”