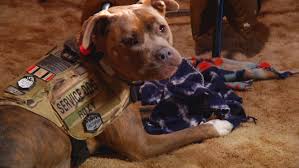 A PTSD service dog that earned nationwide attention has died, according to the pet’s owner. Army veteran Justin Tucker says Roxy, his beloved pit bull, was euthanized Friday morning after being diagnosed with cancer back in August.

“Roxy was my entire world,” Tucker said on Friday.

“From leaving active duty Army and becoming a civilian, she helped with my transition,” Tucker said. “She helped me so much with my PTSD issues, better than any pharmaceutical could ever could. She was a true hero and breed ambassador. She was everything that the bully breeds could be, with a little bit of dedication to training.”

Roxy had a huge social media following, and Tucker took to her Instagram page @roxytheptsdservicedog Friday to share photos of his beloved girl and share a tribute to her.

“10-42 EOW End of Watch; Roxy crossed over the rainbow bridge at 10:20 this morning. She went out with honor and dignity. She will be forever remembered as a hero dog,” Tucker wrote.

“Just try to continue to support me and pray for me as much as you can cuz I’m already feeling a certain type of way,” he continued.

Roxy was a finalist in the American Humane Hero Dog Awards back in 2018.

“She’s literally touch the lives of thousands of people worldwide,” said Tucker. “I never would have thought my service dog from Haywood County, North Carolina, would make a big global impact as she has.”

Tucker frequently trained his prized dog in downtown Asheville, drawing a lot of attention from folks on the street.

“Cause most people see a pit bull in the news it’s a ferocious, aggressive animal,” he said in 2017. “But when they meet Roxy, they have to ask, ‘What kind of dog is that?'”

Roxy came into his life in February 2014, not long after an explosion in Iraq shattered Tucker’s life. The Army veteran said that experience left him with severe PTSD.

“A dark, downward spiral of depression,” he described. “It’s hard to speak of the issues and not be emotional about it.”

“My worst incident was a hand grenade explosion that blew up down onto my shoulder,” Tucker recalled during an interview with News 13 3 years ago. “The recurring nightmares and the intrusive thoughts; it plays a toll on your mind.”

Roxy gave him emotional support and much more. Tucker is devastated, but proud of her legacy.

“She will always be remembered on social media but through other ways as well,” he said. “Haywood Spay and Neuter has the Roxy Fund, which is dedicated to helping low-income veterans in Haywood County — to help assist with spay, neuter and microchipping (their pets).”