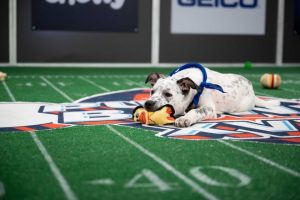 Not even a global pandemic can stop teams Ruff and Fluff.  On Super Bowl Sunday, nearly six dozen mischievous mutts will hit the field for the 17th annual Puppy Bowl on the new Discovery + streaming service and Animal Planet (2 EST/11 PST), which drafts pint-sized pooches for a playful “game” of football. Photos of next month’s starting lineup are premiering exclusively on usatoday.com.

Despite production shutdowns across Hollywood amid COVID-19 safety concerns, Animal Planet still managed to pull off a fur-filled event even bigger than before.

Typically taped on a cozy Manhattan soundstage in early October, this year’s “Puppy Bowl” relocated to a hockey arena in upstate Glens Falls, New York, to accommodate social distancing. As a result, the puppies had a much larger field to play on when the game taped last fall.

“We’re finally shooting in a real sporting venue, even though we are technically a fake sporting event,” says longtime “ruffaree” Dan Schachner. “The scale of it is immense – it looks like a completely different show. It’s a supersized version of ‘Puppy Bowl,’ even though we have fewer dogs.”

“Puppy Bowl” usually features about 100 dogs, all of whom are adopted by the time the show airs on Feb. 7. This year’s game has70 puppy players from 22 shelters, mostly from the northeast rather than nationwide. “We had to restrict ourselves to shelters within driving distance,” says Erin Wanner, Animal Planet’s senior VP of production. “We also needed to keep the number of puppies lower because all the puppies come with shelter reps, and we were trying to keep the number of overall human beings down as much as possible.” People on set wore masks and were tested regularly during the weeklong shoot – a break from the usual one- to two-day day taping schedule. Production moved more slowly, with fewer staffers on hand to wash toys between takes and clean dog poop off the field. But the bare-bones approach had some advantages.  “The biggest thing we noticed is that with fewer toys there were fewer distractions,”  Schachner says. “This is going to sound ridiculous, but it was closer to human football. The puppies were focused on one ball or toy as opposed to 20. Plus, they were distanced (beforehand) and didn’t really meet each other and get to socialize the way they do in prior years, so maybe that made them more focused when they were on set.”

The show also has been bumped up from two hours to three, with new segments spotlighting adoption stories and puppies available to adopt from local rescue groups across the country.

“Dogs really are the silver lining of this crazy year,” Schachner says. “Adoptions have seen a huge uptick in shelters across the country. They can’t keep up with demand.” The New York-based actor and his family have fostered roughly three dozen dogs, including Bluey, an American Staffordshire terrier/Siberian Husky mix and player for Team Ruff in this year’s bowl.

Fostering is “a wonderful experience,” Schachner says. “It allows us to meet a variety of different dogs from all different walks of life and backgrounds, and get them ready for their forever homes.”