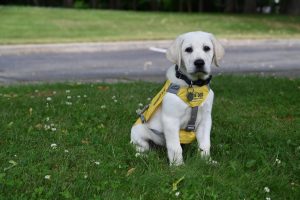 “PenFed is proud to work with America’s VetDogs and we are honored to support the men and women who serve our country and protect our freedoms,” said James Schenck, president and CEO of PenFed Credit Union and CEO of the PenFed Foundation. “Ace is being raised with the purpose of providing enhanced mobility and renewed independence to veterans, active-duty service members, and first responders with disabilities, allowing them to once again live with pride and self-reliance. We are committed to this program and making it work for our employees who are donating their time to raise these dogs for a very noble cause.”

McCarren will spend the next 18 months raising Ace as part of the PenFed family to prepare him for the next step of his training. He will learn additional tasks that are helpful to a person with a disability. PenFed is covering costs associated with the raising of Ace as he begins his journey to become a future service dog.

“As someone who is raising her fourth service dog, I have seen firsthand the powerful impact they have on the lives of a wounded service members and first responders,” said McCarren. “The ability to help a remarkable organization like America’s VetDogs while on the job is one of the many things that makes PenFed special.”

“America’s VetDogs is excited to partner with PenFed on this life-changing program to raise a future service dog for a veteran or first responder with disabilities,” said John Miller, president & CEO, America’s VetDogs. “We are thankful to the entire PenFed organization for supporting the VetDogs mission but also for joining our dedicated group of volunteer puppy raisers to provide Ace with a unique and enriching environment that will ultimately mold him into a confident and well-socialized service dog.”