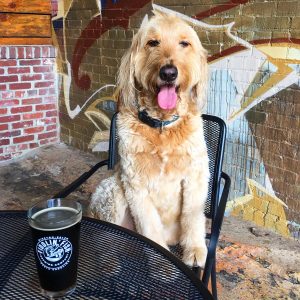 If you’re a regular at any local brewery, you might have noticed that dogs and breweries seem to go hand in hand — sort of like hops and yeast.

And downtown Winston-Salem’s Fiddlin’ Fish Brewing Company is no exception.

“Dogs and Fiddlin’ Fish Brewing Company are a perfect match because of the laid back taproom environment we have cultivated,” says David Ashe, one of the owners. “We want customers to feel as comfortable in our taproom as they do in their own living room, so why not bring your best friend along with you?”

Blonde lookalikes Harper and Banks are certainly at home in the taproom. They love to go to the brewery with their dad, co-owner Stuart Barnhart, who says he could never go without them in tow.

“They are part of our brewery family,” he says.

Harper, a labradoodle, and Banks, a goldendoodle, are as recognizable there as any of the human staff. Harper’s job is to look for any food that may have fallen to the floor. At 105 pounds, she’s also known as “Big Momma” and has the personality to match her size. She loves to play and retrieve things.

“When she isn’t looking for food or chasing something, you can find her sleeping,” Barnhart says.

Her favorite napping spot is under his desk.

Banks, on the other hand, is more laid back. He prefers to nap outside in the sun, while waiting for passersby to pet him.

“He is more of a sweetheart and very affectionate,” Barnhart says. “To sum it up, Harper likes food and Banks likes pets.”

When he’s not at Fiddlin’ Fish, Banks has a side gig as a certified therapy dog. He visits local hospitals with his dog mom and brewery co-owner, Lindsay Barnhart.

While the two pups are not biologically related, it’s hard to tell them apart. The Barnharts got Harper in college 10 years ago and then added Banks to the family two years later to be her companion. They’ve been inseparable since, Stuart Barnhart says.

“They are always together, both at home and at the brewery,” he says. “They hate being apart.”