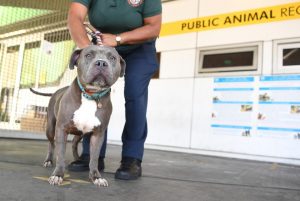 Mollie ran off as the Pasadena sky exploded in fleeting , fiery colors, and Karen Hirst, who owns and loves that silver gray Yorkie-Shih Tzu, hasn’t stopped thinking about her since.

“I’ve cried till I thought I couldn’t cry anymore. We went everywhere together. I took her to the bank, shopping, to the doctor. When I got ready to go to work, she would lay on my clothes and make sure I was going to take her,” said Hirst, who got Mollie as a puppy 13 years ago.

Alongside New Year’s Eve, Independence Day is the biggest day for canine runaways and the busiest for Los Angeles’ animal shelters as dogs flee their homes because of booming fireworks. On the holiday, shelters and rescue organizations work overtime to reunite man with man’s best friend.

Hirst went to a Fourth of July barbecue on Saturday, and Mollie escaped near Navarro Avenue and West Howard Street when the neighbors watching her let her out to relieve herself.

“I came back here, and it was like a war zone. Not just firecrackers, it sounded like bombs going off,” Hirst said. As the amateur pyrotechnics raged on, Hirst’s husband sat on the porch waiting for the green-eyed pooch to come back. He stayed out there until 3 in the morning.

“I just can’t bear the thought of my dog, knowing how emotional she is, that she can’t get back to me,” Hirst said.

The couple reached out to shelters and posted notices of the missing dog across the internet. On Monday evening, Hirst made fliers and prepped a list of animal stores to put them in.

As he ran at South L.A.’s Harvard Park on Sunday morning, Danny Rivera came across a gray pit bull mix.

“I went to pet her and then looked around and didn’t see anyone,” Rivera said.

He said firework explosions have rocked his neighborhood nightly since early June but picked up Saturday night.

“The day of the Fourth, they were really going at it,” Rivera said.

The dog wore a studded blue collar and looked taken care of. He guessed she had just run away, so he started walking with his new companion in hopes she would find its owner nearby. After four fruitless hours, he and the dog — whom he’d named Sunny — went home.

“The way that she smiled at everyone and everything, you can’t help but smile at her too,” Rivera said. He bought canned dog food and potty pads for his guest. On Monday, he took Sunny to the Chesterfield Square Animal Services Center, where a scan showed she didn’t have a microchip.

“I really did bond with the dog. I was really crying my heart out after I dropped her off at the shelter,” Rivera said. He described Sunny as sweet and curious and said she never barked while he had her. He’s gotten permission from his apartment manager to foster Sunny when she becomes available if her owners aren’t found.

Annette Rodriguez, director of field operations at Chesterfield Square, said Fourth of July runaways end up in her facility every year. She blames the fireworks.

“We’ve had animals actually break through windows because they’re so panicked, so scared. They’re sensitive to the noises: They’re loud bangs for us, and our ears are not as sensitive as a dog’s ears, so it can really scare scare animals. That’s why they end up getting out of their yards, trying to get away from all the noises,” Rodriguez said.

Since July 1, her shelter has reunited 38 dogs with owners. Fewer dogs came in this week than expected.

“It has been the calmest Fourth of July we have ever had, which is absolutely surprising due to the amount of fireworks going on, and it really has been because of the number of partners out there supporting us and helping us with scanning [microchips] and intervening with animals not coming into the shelter,” Rodriguez said. “We’ve had so many reunifications where they never even came into the shelter.”

Microchips, tiny implants placed under a pet’s skin, have individual codes that are uploaded with the pet’s ownership information into online databases. Shelters, vets and rescues scan for such chips as a way to quickly get pets back to their owners.

One of Chesterfield Square’s partner organizations, Paws for Life K9 Rescue, scored 18 reunions Saturday night. The group, which works with incarcerated people to train therapy dogs, set up seven microchip-scanning stations across the city. They directed finders of lost pups to the test sites and contacted owners as information came in.

The process was born out of creativity and necessity, founder Alex Tonner said.

“On Fourth of July, there are so many dogs that get turned into the shelter, and normally rescue groups are outside the shelter helping the public there, but because of COVID, no one was allowed to do that,” Tonner said. Shelters are closed to the public because of the pandemic.

Rodriguez called reunions the most emotional part of her job.

“People think of their pets as family members,” she said. “It’s such a beautiful thing to connect that family back together.”

“They saved my family and my sanity by finding my littlest,” he said.

Wesson’s dog ran off as he did yard work and grilled steaks. He realized Waldo was missing when he let his other two dogs inside as fireworks picked up.

“It’s like a kid: You think the worst. He’s been eaten by a coyote. A hawk flew down and grabbed him. He’s underneath a bush shivering. You don’t think anything good. You do a lot of praying,” Wesson said. He searched for the dog for six hours, trolling the streets by foot and truck as fireworks erupted in the night sky, forgetting to eat the food he’d cooked for the holiday.

“They were everywhere, illegal fireworks. On every corner, every little cul-de-sac, on major streets,” Wesson said. “It was hellish…. You think you hear maybe a dog whimpering or barking, but it winds up being some firework.”

About 11:45 p.m., he got a call from Tonner. She knew where Waldo was. A neighbor three doors down and across the street had found the dog and brought him to a scan station run by Angel City Pit Bulls and Paws For Life. Wesson, who pledged to support the organizations and expressed gratefulness for the neighbors who took care of Waldo, credited his dog’s microchip for Waldo’s return.

“If it wasn’t for that, I’d be out looking for him right now,” he said. Now, the family lap dog, who Wesson said is “four and a half pounds, maybe five depending on what he’s eaten that day” and described as “a little miniature heating pad,” is back home, safe and sound.

Hirst is still searching for Mollie, whom she calls her California girl “because she liked to have the wind blowing in her hair.”

“I can’t explain the joy I would have having her back. I think about everything I could’ve done, maybe should have done that I would have a chance to do again,” Hirst said.