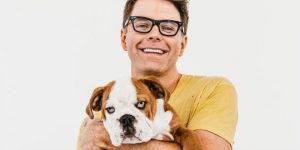 A service dog can be life-changing in helping veterans with PTSD and other post-combat challenges. Unfortunately, due to the cost and time, it takes to train a service dog, less than 1% of veterans in need can obtain one. Dog Chow is on a mission to help change that. The Service Dog Salute campaign supports the care and training of more service dogs for America’s military veterans — so that every hero in need can find a canine hero of their own.

Waking the veteran from upsetting dreams or night terrors

Reminding the veteran to take medications

Alerting the veteran when someone is approaching from behind

Patrolling the perimeter of a room for triggers and threats

Over the next year, Dog Chow will follow the journey of several service dogs in training that are currently preparing to serve a veteran in need.

We had a chance to catch up with Bobby Bones and he opened up to us about how he became involved with Purina Dog Chow and the Service Dog Salute campaign, what it means to him, the importance of service animals, his upcoming projects in the works and more!

I think it is absolutely wonderful, what you are doing, pairing up with Purina Dog Chow for the Service Dog Salute campaign! Can you tell us more about how you became involved with this wonderful cause?

It is such a wonderful cause and on my show, even before I started working with Purina, what we were doing was getting service dogs for Vets because it is a thing and Purina was doing the same thing just on a bigger level. So we were both doing it and running parallel to one another and then they had the idea of why don’t we just combine our strengths and that’s kind of how we ended up in this spot. We had like-minded ideas, so yeah, I’m really excited, mostly because having raised a bunch of money for Vets and dogs …they are super expensive… like $20,000 to get it trained and ready to go into acting as a service dog, so when I found out the amount of good they were doing it was hard for me to not jump in so I did!

What are some ways that people can be involved with the campaign? Would you recommend donations or talking to their local and state government representatives?

It’s great that you bring that up! Actually, the PAWS for Veterans Therapy Act was passed by the House and they are waiting on Senate approval and the easiest way to get involved, for those, like myself, who may not want to write their own letter …I want someone smart to write it for me … but if you go to DogChow.com the letter is already written and it goes right to your own people. That’s a big part of what we’re doing …one, raising the money to get these dogs trained up and two, raising awareness so we can get this bill passed. In the end, we just want to make as many Vets feel as comfortable as they possibly can and these dogs are a solution to that!

Absolutely! I don’t think people always understand the differences between various types of service animals as they mostly think of seeing-eye dogs but don’t often think about PTSD or other types of mental illness that our troops are coming home with!

This is my second year working with them, so at this point, we are so on the same team and last year I was getting to hang out with some of the guys and one of the guys had his dog with him and he was protecting Presidents at Camp David, so he was doing security for Presidents and he’s seen a bunch of stuff and he suffered from panic attacks while he slept and his dog took control of him while he slept, meaning he would jump up on the bed and lay on his chest …he was so trained …and his kids were with him and said our dad is a completely different person because he has this dog. In the end, these guys are the ones fighting for our country, our rights, our liberty, and we should be taking care of them, so that’s why I love working with Purina Dog Chow cause they do! They don’t just say it, as I make sure to partner with folks who don’t just say it, they just do it! It’s really cool and I’m really honored.