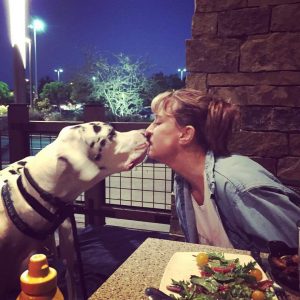 After spending the past three years helping her daughter fight a rare disease affecting her ability to walk, the last thing Santa Clarita Valley resident Lisa Burke expected was to have her dog experience similar struggles.

At the beginning of the year, Burke’s 20-year-old daughter Layne had a spinal nerve stimulator put in her back, allowing her to regain the ability to walk again, but it was only a couple of months later that her 4-year-old Great Dane received a spinal injury of his own.

“It went from my daughter to my dog,” Burke said. “I just got my daughter to a point where we were on the road to recovery … and then all of a sudden, this happens to the dog. … It was a very emotional few months.”

Zeus was Burke’s first dog, who she had gotten as a puppy, and became special to not only Burke, but also to Layne, as well as to Melissa Simmons, who worked for Burke.

“Zeus is my favorite, he’s my baby,” Simmons said. “I helped raise him and I help take care of him, so I always tell her we have joint custody.”

Through time, Burke rescued three more dogs, including another Great Dane, and each time she and Layne would be away for her medical treatment, Simmons would step in as “auntie” and dogsit.

“My daughter and I were gone for months at a time, … so luckily for us, we were able to leave and not have to worry about the dogs at all,” Burke added.

It was in July that Zeus and Eros, Burke’s second Great Dane, got into a scuffle that led to his injury.

“We took the dogs to the vet, and everything seemed to be OK,” Burke said, adding that it was only a few days later when Zeus was screaming in pain that she knew something was really wrong.

“The vet gave him a bunch of medication and sent us on our way,” she added. “Over time, he was just progressively getting worse and not better.”

Over the next few months, Zeus was sent to specialists, received MRIs and though they found the problem, doctors were hesitant to operate, as they believed Zeus would get better with time to rest — yet he didn’t.

“To hear a dog scream in pain was just awful,” Burke said. “It got to the point where he was falling all over the place and couldn’t get up.”

Meanwhile, Zeus had to isolate from his doggie siblings, and Simmons and Burke could see it was affecting him dramatically.

“Zeus is not one to really show or get a lot of emotion, unlike the other (dogs), but you could definitely see it in his eyes,” Simmons said. “We were losing him from the inside out. We were telling him, ‘Don’t give up, we’re not giving up on you.’ … (but) he was a shell of a dog.”

“I thought I was going to lose him, honestly,” Burke added. “It was very sad. His whole demeanor, everything, was just in the tank.”

Finally in September, Zeus was sent to another specialist in Irvine, where the doctor urged Burke to agree to emergency surgery that very day.

“It was a very, very tricky surgery because he had a collapsed disc in his neck and the arteries are very close to where these particular discs are,” Burke said.

One surgery quickly turned into two, as the doctors had to go in a second time to finish the repair when Zeus evidently wasn’t doing better.

It was only after that second surgery that Burke and Simmons began to see a little bit of light coming back into Zeus’ eyes through the photos and videos the vet was sending them as Zeus recovered in the hospital.

“I remember we both just started crying,” Simmons said. “We were afraid to have hope.”

Zeus was released after about a week and began his recovery at home with a neck full of staples.

“There had to be 50 or 60 all the way down his front chest,” Burke said. “I rearranged my house, and I had to buy all kinds of stuff, like harnesses and rugs and beds, to keep him comfortable, away from the other three dogs.”

Though the vet was pleased with his progress, Zeus’ recovery was a slow one, as he slowly regained his muscle and began to walk on his own again.

“He kept falling over, (and) he couldn’t go potty by himself, I’d have to hold him up with the harness,” Burke said. “Because she didn’t want Zeus to be by himself, my daughter would lay on his bed with him and fall asleep with him.”

Issue after issue continued to delay his recovery, and though it was heartbreaking, he’s now begun to turn the corner, Burke added.

“The good thing is he’s now strong enough where he is holding himself up,” Burke said, adding she’s even been able to give him supervised visits with his siblings. “He’s still very shaky, but he’s getting stronger and stronger. … When everything first started, I didn’t have any faith in anything working, because this dog declined so badly, and I’m amazed where he is today.”

“It’s still hard on his spirits,” Simmons added. “You can still tell (he’s struggling). It kind of breaks my heart because he doesn’t understand that we’re helping him by keeping him isolated from his brothers and sisters.”

Now, the next hurdle is to get Zeus into physical therapy so he can continue on his road to recovery.

In the meantime, Simmons has been collecting donations from the community, as she plans to host a garage sale on Saturday to help raise funds for his recovery.

“The bottom line is the financial hardships are just a lot,” Simmons said. “Lisa is not good at asking for help, nor is anyone. … Her daughter and our fur babies mean the world to us, and it’s been a long fight and they deserve some happiness, so it’s all for Zeus and to give back to Lisa and to Zeus.”

Since posting on social media, the “Zeus Sale” has gone viral, with numerous people generously stepping up with goods to donate, as well as monetary donations.

“It’s been so amazing to see the people who have come forward and donated stuff to us,” Simmons said. “Everything we’re doing is to give him whatever quality of life that we can. He deserves it.”