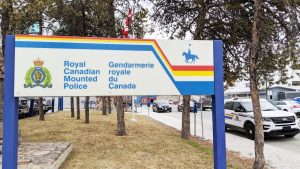 In a statement that amended some earlier information and contained new detail, RCMP said both an officer and a police dog were injured before any shot was fired.

The RCMP account of what took place contradicted several elements of the account provided by Lawrence Mantla and Lori Dashney, who own Rocko, the pitbull shot in the encounter.

On Wednesday, Mantla told Cabin Radio his dog had been bitten by a police German shepherd first before reacting in self-defence. Mantla said he had been holding on to his dog and asking police not to fire when Rocko was shot.

The pitbull, said by his owners and several other residents to be gentle in nature, received a gunshot wound to the throat.

Neither Mantla nor RCMP, in their first statement, had mentioned the presence of a third dog.

However, in a second written statement on Thursday, RCMP said a police dog named Hoss and his handler “had an interaction with two aggressive unleashed dogs.”

Police said the handler had been conducting a training session near 44 Street and 49 Avenue at the time – 10:45am, a revision to Wednesday’s statement, which had placed the incident at 11:30am.

While RCMP said such sessions often take place in downtown back alleys, police did not directly answer a question from Cabin Radio regarding whether the incident had taken place on public or private property.

On encountering the two dogs, RCMP said their officer “was first injured” and the police dog was also hurt. Neither injury had been reported by police in their Wednesday news release.

“As the interaction progressed, the member discharged his firearm. One of the two unleashed dogs was injured as a result, and was taken to a local veterinary office for treatment,” Thursday’s statement continued.

“Both the handler and Hoss were treated for non-life threatening injuries and released.”

Rocco, a pitbull owned by Lawrence Mantla and Lori Dashney, is pictured after being shot during an incident on June 3, 2020.

RCMP said the incident was now the subject of an independent officer review, meaning a commissioned officer of inspector rank or higher will examine whether RCMP policies and procedures were followed.

“The [review] is ongoing and no further details will be released,” Thursday’s statement concluded.

On Wednesday, he had described holding Rocko’s chest at the moment the dog was shot.

“That dog bit my dog twice, then my dog turned around and bit him on the lip, hanging on to the lip,” Mantla said in his account of the same incident.

“He shot my dog point blank. Their dog attacked my dog and now they’re blaming us.”

Rocko had a suspected ruptured esophagus, Mantla said on Wednesday evening, and may require surgery in Calgary.

“Handlers understand the unique bond between an owner and a dog, and share a concern any time a dog is injured.”