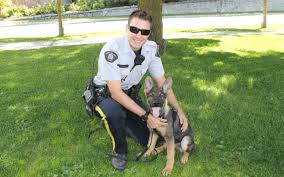 RCMP say they were conducting a training session with a service dog before an officer shot an “aggressive” dog that was off-leash in the downtown area of Yellowknife.

In a news release Thursday, RCMP say around 10:45 a.m. Wednesday, the police force’s Police Dog Services — which included a police service dog named Hoss and his handler — were training near 49th Avenue and 44th Street. RCMP dog training sessions can often happen in public areas, like back alleys, the release says.

During the training, police say Hoss and his handler had “an interaction with two aggressive unleashed dogs.”

They say a police dog services member was injured, as was Hoss. The release says the interaction continued and the member then discharged his fireman. Police say as a result, one of the off-leash dogs was injured and taken to a veterinarian for treatment.

Hoss and the handler were treated for non-life-threatening injuries, according to police.

RCMP say they’ve initiated an Independent Officer Review of the incident — which will be conducted by a commissioned officer of the inspector rank or higher — who was not involved in the incident. The officer will determine if the RCMP’s policies and procedures were followed in the given circumstances of the incident.