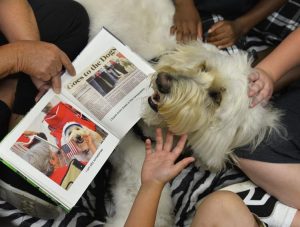 Peggy Irwin always will remember the way Murray charmed his way to more dog treats from the counter at the front office of The Villages Charter Middle School. “My fondest memory of Murray is when we would give him a treat and then say ‘all gone,’” said Irwin, principal at The Villages Middle School. “He would put his head on the counter and look at you with his big brown eyes as if to say ‘I know that is not true.’ Needless to say he always got at least one more.”

Without any sign of distress, Murray climbed up on the sofa right before bedtime last week and passed away, which owner Sara Morgan said was the “Murray way.” He would never saddle the people he loved with the burden of worrying about him.

“Murray’s way was to please and comfort others,” Morgan said.

When he was with other dogs, the tender-hearted goldendoodle would let other dogs eat first or leave some of his food for them.

“Small children sometimes were fearful of petting such a large dog, so Murray would lay down for them to pet,” she said.

From the neighbors who can attest to his congeniality to the teachers who experienced his professionalism, the 9-year-old made an impact on people’s lives in The Villages.

Murray was active in the Dynamic Dog Club’s circus, which performed for clubs and for Camp Villages. A registered therapy dog, he regularly went to Trinity Springs Memory Care to visit residents, said Morgan, of the Village of Hadley.

Murray also was registered with the international R.E.A.D. program, which allows animals to go into schools so kids can practice reading to them.

“When entering the front office everyone rushed to him to pet him,” Irwin said.

Murray’s work as a reading dog was very important to the community, she said. The program offers children a chance to read aloud at their own pace to a nonjudgmental audience, such as Murray, which boosts students’ confidence.

Murray began volunteering in local schools seven years ago. He helped pass out reading certificates during a fifth-grade graduation ceremony at Villages Elementary of Lady Lake.

Now the ESE school specialist for Villages Elementary of Lady Lake, from 2008-14, Susan Rayment was the special education teacher for third through fifth grade. She said when Murray would visit for the reading program, he provided therapy for both the students and adults.

“If you were having a bad day and saw Murray, everything got better,” she said. “He was an amazing soul. There was something about him that you fell in love with.”

When he wasn’t wearing his professional hats, Murray’s favorite pastimes were golf cart rides to Lake Sumter Landing, participating in parades and visiting neighbors and his canine friends, especially his “wife.”

Tammy Smith, of the Village of Virginia Trace, has Chloe, a golden retriever who married Murray in a ceremony a few years ago.

“(Chloe and Murray) didn’t live together, but she’s going to miss him,” Smith said. “She’s going to say ‘Where is my hubby and my best friend?’ He’s going to be so missed.”

Lori and Scott Zulauf, of the Village of Amelia, would watch Murray when the Morgans went on a trip. Lori said Murray was an affectionate dog.

“I’d come out and Murray is on my husband’s lap, as big as he was,” Lori said. “And my husband just loved it and let him come up and cuddle in.”

Lori couldn’t resist Murray, either. She enjoyed treating him to a Starbuck’s puppuccino (a cup of whipped cream), when they’d all meet up at Lake Sumter Landing Market Square.

“He was a very special loving dog,” Lori said. “People were drawn to him.”

Murray’s picture also has hung by the volunteer check-in at Villages Elementary of Lady Lake for years.

“We just decided it should be up front,” Rayment said. “Everybody knows Murray, and everybody loves Murray.”