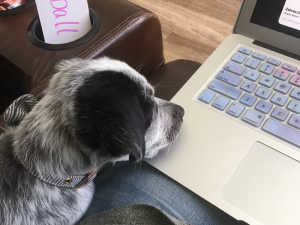 The students in Hailey Beutler’s first-grade class at Edgemont Elementary School in Sandy received a special treat when they logged onto their Canvas online learning site on April 13. Beutler, known affectionately to her students as Miss B, shared her new puppy named Coconut in their morning meeting. The students’ responses were immediate. “There’s been a lot of, ‘He’s so cute!’ and ‘I love him!’” Beutler said.

Beutler adopted Coconut from the Humane Society of Utah where she volunteers on a weekly and as needed basis and said, “I have always loved animals, especially dogs. I’ve been looking for a while but hadn’t found one that I thought would be a good match until Coconut came along.”

The school closures because of COVID-19 was also a factor in the adoption. “Being able to stay home and train him while still working was a huge plus as far as timing went. My ultimate goal with the dog I adopted was to hopefully become a therapy dog team and visit classrooms, hospitals and nursing homes.”

Beutler, a Draper resident, was excited to share Coconut with her students even if it was in a different way than she would have if they were all in the classroom. She sees the importance of maintaining connections and relationships throughout social distancing and school closures.

“I’ve learned quickly in order to teach, you first need to build a relationship. A great way to do this is through sharing things that are happening in your life with your students because it makes them more comfortable and encourages them to share about their lives too,” she said. Knowing more about her students and what is going on with them, especially during these times, helps to guide Beutler’s interactions with each student and allows her to better understand their needs.

Coconut has also helped Beutler with the stress she’s been feeling in the transition from classroom to online teaching. “It’s really hard not being able to see my kids,” she said.  “It’s also been stressful putting together an online course and making sure they have everything they need to succeed.”

She said watching Coconut lightens the mood with all that is happening. “He’s been a huge stress relief for me because he loves to snuggle and is such a goofball,” she said. Coconut even had his own Easter egg hunt, but he was more interested in “chasing and chewing the plastic eggs than the treats inside them,” Beutler said.

Coconut and his siblings were in a foster home until they were old enough to be adopted. Beutler says that the Humane Society of Utah tries to keep animals in their current situation if it’s a good fit by, “providing any help they can to the current owners that will help prevent them from having to surrender the pet.” Beutler said that so far 9-week-old Coconut seems like he will be a good fit for therapy work. In the meantime, he certainly is helping her first-grade Eagles feel connected and bringing them joy. Such was seen with one student’s response to the prompt: What was the best thing about your spring break? “Miss B. getting the cutest puppy ever!”