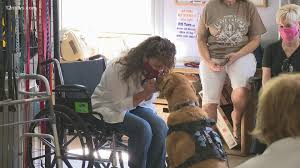 Phoenix police dispatchers answer some of the toughest call and now, a four-legged friend with a special connection is helping answer their call.

Milo Glasser is a support dog and he’s pretty good at making friends. He’s become a good friend to many of the 911 operators with the Phoenix Police Department.

Myla Marovich is a communications bureau manager with the police department. Marovich says Milo brightens up the room when he walks in.

“The minute he shows up it’s, ‘Hi Milo,’ ‘Oh Milo’s here,’ you can tell the mood has changed,” Marovich said.

Julie Brewer is a therapy and service dog trainer with the FETCH Foundation. She helped train Milo.

“When they’re working a long shift and taking a lot of difficult calls, just having a dog there they can hug or pet can relieve that stress and anxiety,” Brewer said. “Milo walks freely throughout the call center. They can wave at him, they can call him over. He can plop under somebody’s desk and nap for a bit.”

But before Milo became a support dog, and went through a lot of training with the FETCH Foundation, he was already a part of the Phoenix Police Department’s extended family.

“He brings comfort and happiness to the people he gets to work with now, and Officer Glasser was able to do the same thing,” Marovich said.

Marovich says Milo was a rescue dog in Officer David Glasser’s family. After Officer Glasser was killed in the line of duty back in 2016, Milo became a part of her family.

“It’s been humbling and satisfying that we just thought he was going to be our family dog and now his legacy has gone so much farther than that,” Marovich said.

Glasser’s legacy is also shared next to his serial number on Milo’s vest.

“’Love you,’ that was what Dave Glasser told everybody that he worked with on a daily basis,” Marovich said.

It’s a message the Phoenix police department still gets to see today, thanks to their friend, Milo.