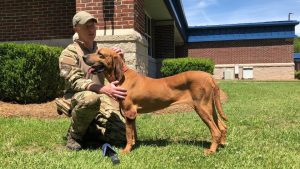 “It is with great sadness that we announce the passing of retired HCPD Bloodhound Shelley, who crossed over the rainbow bridge Monday morning at 11.5 years old,” the department tweeted.

Shelley served from 2011 to 2020 and was involved in more than 170 calls for service with a success rate of about 90%, according to the department.

The department asks people to keep Shelley’s handler, Stg. Miller, in their thoughts.

“Over the years, she located countless missing people and put even more behind bars,” Miller said. “Anyone who has ever been on a track with her can say how good she was. Even though she was retired, she still wanted to work every time she came out of the kennel. I’m just glad I had the privilege to hang on to the ‘dumb end’ of the lead for all those years.”