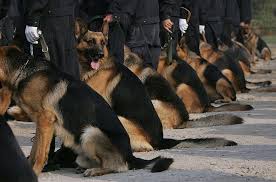 The dogs of war, the dogs that help keep the peace, the dogs that track down the bad guys and turn up the missing,Â  Man’s best friend and co-worker. What happens to them after a lifetime of service?Â  Many retire with their handlers but not all.Â  When the time comes, who rescues the rescuers?

“We are so grateful for the service of our nationâ€™s retired Police K-9 and Military Working Dog Heroes that we want to honor them in retirement, and ensure the best quality of life for them, by providing assistance with medical costs, food and end of duty services. We rely on donors like you to fund our projectâ€‹, because there are no public funds for police and military working dogs.”

Jason was on the Morning News to give an update on the foundation and the latest on a Moses Lake dog named Chief.

Johnson says he isÂ now working with Congress to arrange sustainable funding through passage of the K-9 Hero Act.

For a little perspective, here’s a look behind the badge of K-9 training in California.