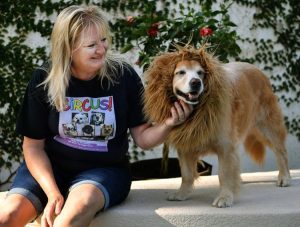 With subtle cues only a dog parent could recognize, on her last night as Simba the lion, Chloe told Tammy Smith she was ready to turn in her mane.

The golden retriever Chloe will turn 12 in August, and Smith said she’s noticed signals from Chloe that she’s ready to pivot to a new lifestyle.

Smith, of the Village of Virgina Trace, and Chloe performed in the Dynamic Dog club’s traveling circus for the past three years, a show the group performed for various clubs and events. Chloe was Simba, a loose lion in pursuit of her trainer — Smith — while performing such tricks as balancing on a beam and jumping through a hoop of “fire.”

But now that her Simba days are over, she’ll have more time to enjoy her swimming pool, dig around in the grass and take walks.

“She’s done a lot,” Smith said. “She’s ready to be retired and enjoy her golden years.”

Sara Morgan, of the Village of Hadley, has a goldendoodle named Murray, who acts as the polar bear in the circus show. The much younger 9-year-old dog and Chloe are married.

At each performance, Murray would lie very quietly and wait for Chloe’s entrance.

“As soon as I would say her name, he’d look all around to see where she was,” Morgan said.

On the night of Chloe’s last performance, Morgan could tell she was not herself.

“Neither was Murray,” she said. “He was mopey.”

Morgan is a bit nervous about how Murray will respond during his next circus show without Chloe there as his muse. The next show, which raises money for charities the club supports, is set to happen at the end of April.

Morgan said she is happy Chloe gets to enjoy retirement.

“She’s has been very, very faithful in providing the entertainment for our circus,” Morgan said. “She’s put in her time. It just won’t be the same without a golden retriever with the golden mane being our Simba.”

As an experienced reading and therapy dog, Chloe is not totally hanging up her hat. She’ll still participate in the parades with the Dynamic Dogs, and she’s also working with patients at Cornerstone Hospice.