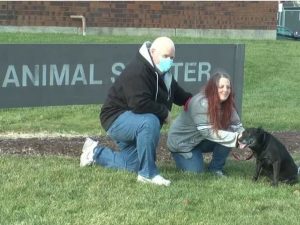 Three years after escaping from a fenced in yard in an unfamiliar city, Lola the black Labrador is back laying on the couch with her mom Debra Mejeur in Kalamazoo.

Mejeur has been waiting for this day since Lola ran away in October 2017. After spending years navigating outside on her own and relying on the kindness of strangers, it was nothing short of an early Christmas miracle that Lola was returned to her family on Saturday, Dec. 5.

On Thursday, Mejeur received a text saying her pet Lola’s microchip had been detected and to contact DuPage County Animal Services in Illinois.
“I lost it,” Mejeur said Monday, Dec. 7. “I started crying because it was just unreal.”
Lola was found about 12 miles from where she first went missing three years ago.
Mejeur and her husband Steven took Lola on a trip to Elk Grove, a suburb of Chicago, to visit friends in October 2017. They received a call from neighbors that Lola was running down the street after escaping from the chain link fence and commenced what would turn into a lengthy search for her.
Lola’s escape was all the more shocking to the Mejeurs because of her calm nature as Debra’s service dog for epilepsy.
For two months, Mejeur and her husband drove three hours to Elk Grove every weekend to look for Lola, but the trips became costly and the tips slowed down. It was emotionally and physically exhausting, Mejeur said.
“It was just devastating,” she said. “I hated leaving Elk Grove because it just felt like I was abandoning her and leaving her behind.”
As time passed, Mejeur brought a new black Labrador home to serve as her new service dog. She said she lays down at night and pets her new service dog Maddox until he falls asleep.
“It made me appreciate having a pet after losing one,” she said. “You don’t know what tomorrow is going to bring. I want him to know my last words to him are that I loved him.”
Mejeur held out hope for finding Lola. She joined every Elk Grove neighborhood group she could find and would post every year on the anniversary she went missing asking if anyone had seen her. She even sought advice from a professional dog rescuer.
She worried during the polar vortex and played out scenarios about how Lola would navigate an area with so many highways.
She hoped that if someone out there had taken Lola in that they would care for her as much as she did.
Mejeur’s wish was granted and a couple in Glendale Heights did look after Lola. They noticed her in the woods and set out food and water for her for a year. On Thursday, they gained her trust enough to put a leash on her and take her to the DuPage County Animal Services where Mejeur was notified immediately.
Over the weekend Mejeur drove to the animal shelter in DuPage County to greet Lola. They brought a photo of her to share with the couple who took care of her but they didn’t show, Mejeur said.
“They are amazing people who did a very selfless act,” she said. “They will always be a part of our family and our lives and Lola’s story.”

In the yard in front of the animal shelter Lola was timid at first and hid behind the vet. She gave Mejeur a few sniffs and one big lick on the forehead before her tail started wagging wildly and she burrowed into Mejeur for a hug. When she noticed Mejeur’s husband, Lola bounded over to him knocking him to the ground with excitement.

Lola was in good health with no noticeable signs of injury or trauma. She had lost 10 pounds since Mejeur saw her and the inside of her ears turned black from suspected frost bite. To Mejeur’s surprise, Lola’s fur stayed a sleek black.
Lola will go to vet this week for a full check-up but overall she has adapted to being back at home and to her new brother, Maddox, Mejeur said. They’ll retire her of her service dog duties and plan to spoil her from here on out, Mejeur said.
“I wish she could talk because I would probably give her a little lecture, too,” Mejeur said. “‘You’re not suppose to run away. Don’t do it again.’”
Next month is Lola’s eighth birthday — a date Mejeur got to pick when she adopted her. Mejeur’s birthday is Dec. 12, or 12-12, so she picked Jan. 2, or 1-2-12, as Lola’s birthday. This year the celebration will be extra special for both of them.
“I usually hate this time of year since growing up I always got birthday slash Christmas presents,” Mejeur said. “This will be the only time I will accept a birthday slash Christmas present without any complaints.”