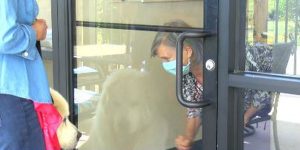 A paw of support – on Friday therapy dog Diamond Lil got to visit her friends at the ChristyCare Senior Day Living Center in Huntsville.

Christy Todd, the founder of ChristyCare said the visit looked a bit different for safety reasons, but it was still a happy one.

“It is unfortunate that they can’t touch her because that’s human nature they want to reach out,” Todd said. “They will probably try to get out of the door and reach out and get her, but we are glad she’s here and I know they’ve missed seeing her.”

Friday was the first visit after months of being away.

“Pet therapy is crucial just like art therapy, or music therapy,” Todd said. “So many things that help the elderly.”

Diamond Lil’s owner, Nikki Kolar, said even Diamond Lil benefited. “She seems to have a sense about her that there is a need and she is able to filter into that need and go to whomever needs her that day,” Kolar said.

The senior day living center closed at the beginning of the pandemic as a safety precaution and only opened after families started pleading with the company.

“Families were calling saying please open back up, my mom lost so much weight over those two months,” Todd said. “So it was kind of failure to thrive over that routine and we had to help.”

With plenty of precautions in place, Todd said with almost every patient having dementia, they constantly have to remind patients to keep masks on and sanitize. Something they don’t seem to forget though, Diamond Lil.