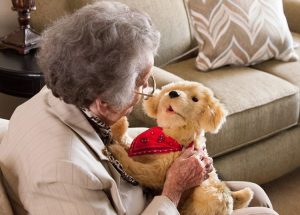 ll of us who live with dogs know the many ways they benefit us. Chief among them are companionship, love, affection, and a sense of calm and happiness. Numerous research projects have studied these real, measurable effects and have unequivocally proven dogs’ positive impact on both our health and well-being.

Recently, some in the world of health care are taking the concept a step further by studying the benefits robotic animals may have for the elderly. Research is finding that this traditionally isolated social group can derive great solace from a robotic “pet.” Though sometimes costly, they have been shown to decrease stress and anxiety and reduce the need for pain and behavior-related medications.

Difficult times often inspire innovation, and a handful of institutions—among them, hospitals, nursing homes and assisted-living facilities—have adopted the use of robotic pets as companions for their patients. Because the Food and Drug Administration classifies the robot as a biofeedback device, Medicare will cover its purchase and use by therapists. (We aren’t sure if this also pertains to real, live therapy pets; if it doesn’t, it should.)

In one study, patients who were paired with a robotic pet were monitored over a six-month period. The staff reported that the robots—“which acquired names and, at holidays, festive outfits—helped calm residents, increased their social behavior and improved mood and appetite.”

At the high end, with a price tag of $6,120, is the PARO Therapeutic Robot (above), a popular model from Japan, that mimics a baby harp seal in looks and behavior.

The robotic seal pup has sensors that register touch, light, sound, temperature and posture, and can perceive people and the environment. For example, its light sensor enables PARO to recognize light and dark. The tactile sensor allows the robot to respond to being stroked, and the posture sensor, to being held. Its audio sensor allows it to recognize voice direction and words such as its name, greetings and praise.

A much less expensive (and simpler) device retails from $65 to $130 and is produced by Ageless Innovation, a spinoff of Hasbro. They offer dogs and cats who look very much like traditional plush toys but are specifically designed and marketed to families who “seek engaging products that foster meaningful connections through play, joy and happiness ….” These battery-operated pets contain built-in sensors and speakers that enable the devices to interact on a basic level. Features include a calming heartbeat, lifelike coat and authentic barking sounds that respond to the human voice.

Robotic pet companions were initially tested with adults diagnosed with dementia, the idea being that those with reduced cognitive capacity would accept the robots as real animals. A 2017 randomized controlled trial that assessed the effectiveness of PARO pets with these individuals found the animatronic seals to be helpful to those involved and, by extension, to their families and the institutions who cared for them.

Later, when trials were run with seniors who were not similarly impaired but were suffering from loneliness, positive results were also reported. It seems that having a beneficial relationship with a robotic pet does not require a suspended sense of reality.

These relationships have been compared to the relationship one may have had with a favorite doll or plush toy as a child—which, for many, served as a beloved companion, confidante and source of comfort. Most people have embraced the value of therapeutic visitation dogs, many of whom are rescued from animal shelters and trained specifically to work as therapy dogs. While the practice has grown steadily, the need, sadly, outpaces the supply of volunteers. As long as that’s the case, perhaps robotic pets are the next best thing.

While some may see them as a step toward further dependence on machines and computers for emotional well-being, it is difficult to argue with the beneficial results. As we face a growing and increasingly difficult social and medical challenge—providing our senior population with quality care—they may be a valuable tool.

Have you experienced either positive or negative effects of a robotic pet interacting with a family member or friend? We’d love to hear from you about it!