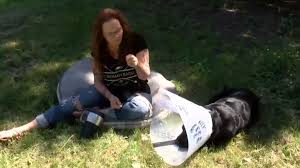 Bear, a seven-year-old black lab, is still wearing a special collar to protect his wounds after getting attacked on Saturday.“He was pretty sick the first night and we weren’t sure he was going to make it,” said Bear’s owner Seanna McLeod.McLeod and her spouse were working at a nearby residence when Bear walked down to a part of his own property in Royston, across from Roy’s Town Pub.The next thing the two knew, Bear was staggering back to them with a serious wound on his head.“He was staggering towards us as we pulled up in the driveway and I could see that there was a massive lump on his head,” said McLeod. “I didn’t really notice his ear yet, he wouldn’t let us touch him and then we found blood.”They also soon found a metal pipe that had blood and fur on the end of it and figured Bear had been hit twice in the head.“What we think is the biggest blow came from the side like a golf swing and then a bonk on the top of the head so he took the worst of it right on the side of the jaw which is probably why he’s still alive,” McLeod added. McLeod says witnesses told them they saw two men on bikes in the area at around the time Bear would have been attacked, sometime around 6 p.m. Saturday.McLeod is confident Bear would not have been acting aggressively towards anyone because he is a companion dog for her spouse, who has severe PTSD due to military service.“No, his demeanour is so sweet and gentle. He’s really well-known in Royston,” explained McLeod.“He had failed the service dog training because he’s too laid back . . . But he’s still his service dog, they have a great bond.”Both the local RCMP and the BC SPCA are now investigating the incident.Anyone with information about the attack should call the Comox Valley RCMP or the SPCA.