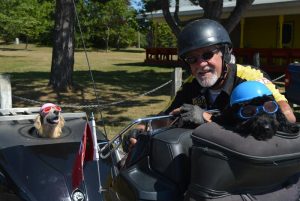 Mike Doucette, 64, a retired construction worker, loves to drive everywhere on his Spyder motorcycle but he never leaves home without Ruby, his eight-year-old golden retriever, and Reno, his four-year-old golden doodle.

But, what really stands out with this road show is the dogs accompany him on the road wearing their own helmets and goggles. The dogs are strapped in so they don’t jump or fall out. The goggles, called Doggles, protect their eyes from the wind and bugs. The helmets are just for fun.

Ruby and Reno are not only Doucette’s two best friends, they are also service dogs so they are often invited out to hospitals and seniors’ homes to help perk people up. The Kiwanis Dairy Bar in Victoria Park is another spot where they like to hang out.

Doucette said the story started in Ontario, where he is from, in 2012 when he was diagnosed with a number of serious health ailments. When he got out of the hospital, he decided it was time to start enjoying life a bit more. So, he bought a Spyder motorcycle and a trailer that he modified so Ruby could ride with him. Doucette said he was married at the time and his then-wife also bought a motorcycle and she wanted a dog to drive with. So, they got Reno.

“When I first started with Ruby I would put her in the trailer and just went up and down the driveway and she was fine,’’ Doucette said. “I put the goggles on her and it was fine so we went out on the road and she never once put up a fuss. Same with Reno. They were fine with it because they wanted to be with us.’’

Doucette and his wife aren’t together any longer but Ruby and Reno are still along for the ride.

Most of the road trips will involve stopping where the dogs can jump in water, cool off and chase a frisbee. Dairy bars are another hit with Ruby and Reno. They get an ice cream cone every time.

“It’s also an instant ice-breaker for people to come over and talk. You meet so many different people and I can see people’s reactions when we’re on the road. People come over and ask to take pictures.’’

The dogs are also a comfort for their owner. Doucette was diagnosed with post traumatic stress disorder (PTSD) after he had adopted Ruby and Reno. His physician told him he should get service dogs but he already had two.

“It’s a comforting thing. I’m kind of a shy person. They give me confidence and it’s, I don’t know, a security blanket?’’

But, Ruby and Reno seem to be doing as much for other people as they’re doing for their owner.

“It puts an instant smile on your face,’’ said a woman passing by as The Guardian interviewed Doucette next to the dairy bar at Victoria Park.

Christina Linton, the activities director at the Dr. John M. Gillis Memorial Lodge in Belfast, said when her husband told her about the Facebook page she knew an invitation to the seniors’ home had to be extended.

“Before COVID, family members would come in and they would bring their pets. There is a real strong connection between residents and animals but since COVID animal visitors have also been restricted so they haven’t been able to get that love,’’ Linton said.

So, Linton invited Doucette and his buddies out where an event was held recently outside the facility so physical distancing could be observed. Of course, ice cream was on the menu. She called the event Ruby and Reno’s Drive-thru Dairy Bar. About 45 residents, and the dogs, enjoyed a variety of flavours of ice cream.

“When they saw them pull up, it was nothing but smiles,’’ Linton said, referring to Ruby and Reno’s arrival. “I mean, who has ever seen dogs in a motorcycle before wearing goggles and helmets? It was a wonderful day.’’

Doucette never tires of the attention, even when police officers pull him over to check on the dogs’ safety, and so they can snap a picture.

Doucette said one time in Niagara Falls, Ont., a police officer stopped traffic in all four directions at an intersection so he could take a picture of Ruby and Reno riding shotgun. Next thing Doucette knew, 50 bystanders had surrounded the motorcycle, everyone snapping pics.

“It really warms my heart,’’ Doucette said of what Ruby and Reno have done for him and others. “Visiting the nursing home in Belfast . . . that was a really touching day, just to see the seniors and the smiles on their faces..’

“What better way to ride around on a beautiful day than on a motorcycle with your two best buddies,’’ he said, choking back tears.