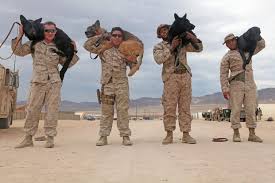 A soldier’s dog is in urgent need of rescue, or he could be left behind as his soldier is being deployed back to the U.S. from serving overseas. Due to reduced flights and heighted requirements for animal travel there are just days left to make this rescue happen and keep this soldier and his dog together.

“The United States military does not leave best friends behind. We need your help to reunite them here in America,” explains Robert Misseri, co-founder of Paws of War. “Even small donations will add up to help. We want to give Specialist Lucas the great Christmas present of bringing his dog back home with him.”

When soldiers are deployed they can get lonely, miss home, and become depressed. Every once in a while they are lucky enough to come across a stray animal that they befriend, which brings them happiness. That’s exactly what happened to Army Specialist Lucas, when he came across a dog that he’s now desperate to bring back to the U.S. with him now that his deployment is over.

“I noticed his calmness, he just wanted some love and attention. I love all animals but he was special,” says Specialist Lucas. “I can’t imagine having to leave my best friend behind, God only knows what will happen to him and my heart will be broken.”

The soldier saw the dog walking around, lonely and hungry, near the base where he is stationed. As he considered how he could help, the dog made his way to him, wanting attention. Specialist Lucas decided to name him Boy Dawg, and they instantly made a connection. Each day, the dog would seek him out for attention and food.

Over time, they created a bond that has helped Specialist Lucas during his time being deployed. When he got word that he was going to be sent back home to the states, he couldn’t imagine leaving Boy Dawg behind to forage on his own again. By this point, he considered him part of his family. He reached out to Paws of War to see if they could help him bring his dog back home.

Paws of War has helped numerous soldiers to bring their pets back to the U.S. However, this year the mission is more challenging to pull off. The pandemic has severely limited the number of flights coming from the U.S., especially those allowing dogs. Plus, flights from overseas are costly, and there is a lot of red tape that needs to be addressed and logistics to overcome.

The only way they can successfully bring Boy Dawg home with Specialist Lucas is with financial help from people in the community. They are urgently accepting donations so they can plan the mission and secure the flight.