Saving Dog From A Fire 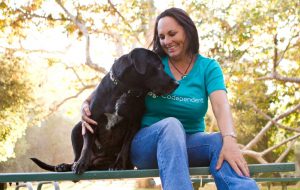 With the west still feeling the heat from this season’s wildfires, an organization is on a mission to help our four-legged friends who are also victims of these fires.

For nearly a decade the Emma Zen Foundation in Anaheim, Calif. has been supplying fire departments and first responders with life-saving pet masks for dogs, cats (and other animals!) saved from fires. And this season is no different. With California and Oregon seeing an unprecedented wildfire season, it’s imperative that animals are also considered in rescue efforts.

Yet, Debra Jo Chiapuzio, the founder of the Emma Zen Foundation, believes a major hurdle in saving pets is the fact that communities don’t think about the issue until it’s too late.

“We are emergency preparedness, not emergency aid,” says Chiapuzio about her nonprofit organization, which relies on public funding for the masks. “We can not just go drop off kits — local fire department needs to be established with them prior to their need.”

And while human masks can work for dogs, they aren’t ideal.

The masks used on people have a small curve to them that allows them to fit our faces, so when it came to aiding pets, the best they could do is lay it in front of an animal’s nose and turn the air all the way up. This is commonly referred to as “blow-by air” technique, says Chiapuzio.

But the masks Chiapuzio donates to fire departments and first responders are cone-shaped, allowing them to snuggly fit over snouts. “They have rubber seals that allow for closure over the nose, creating a directional flow of oxygen into the nostrils while holding the mouth closed,” she says. “This simulates proper pet first-aid CPR.”

The mission behind Emma Zen Foundation began back in 2007 after fires had ravaged through Orange County, Calif. and Chiapuzio and had just gone through a life crisis.

“I didn’t feel super comfortable socializing at that point in my life, so I found myself at the local shelter looking for a companion,” she says.

It was here, that she saw a quiet dog who was a victim of the fires, and while many were stressed, she remained calm, even after a chicken got loose. Chiapuzio knew her zen-like demeanor was much needed in her life. As a medical tattoo artist, Chiapuzio was also a pet first-aid instructor. “I found myself in the position to see my first pet oxygen masks and like many didn’t know it’s purpose,” she says. But what she did know is she wanted the pets in her city, along with Emma to be safe (who is a bit of celebrity in the biker community, having traveled more than 75,000 miles in a motorcycle sidecar).

After launching in 2010 with her local fire department, she realized there was a need beyond her community. “I started reading our online post comments, with people saying ‘I wish my pet had that same advantage’ or ‘How can I protect my dog like this?’”

Chiapuzio began tracking fires and contacting fire departments in the area to see how she could get pet masks in their vehicles.

“I felt like I was ‘behind’ the fire, but it was a start,” she says, adding, “Today with so much of the west on fire, I watch the morning news and find myself thinking, ‘okay that department is covered’ or ‘that county has pet oxygen masks.’”

To date, the Emma Zen Foundation has donated more than 7,500 masks but Chiapuzio knows there is still opportunity for growth. “Emergency preparedness is an action! We can’t sit back and do nothing and then be astonished when we have nothing to work with when that an unexpected predicament happens.” she says.” If your town has this equipment, it isn’t a reason to not support the Emma Zen Foundation. Most of the time it’s some person in another state that allowed your area to receive your department’s Pet Oxygen Masks’ kits.