Saying goodbye to ‘a gentle giant 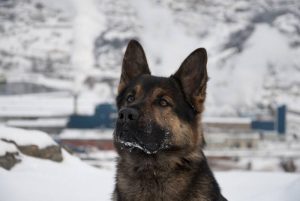 The Royal Newfoundland Constabulary lost one of its retired members recently with the passing of police service dog Biff.

The beloved German shepherd, who passed away March 17, was 10 years old.

Biff’s policing career began in 2011 after he and his handler Const. Jody Ryan completed the Police Service Dog Training Program in Alberta.

Ryan and Biff were stationed in the RNC’s Corner Brook detachment until 2016 when they moved, with Ryan’s family, to the force’s headquarters on the province’s Northeast Avalon.

Even before he chose a career as a police officer, Ryan knew working with animals was what he wanted to do.

“So this is a perfect fit for me. It’s the best job in the world,” he said.

When he joined the RNC in 2006, Ryan said it was always his goal to join the force’s police dog unit. After five years as a street patrol officer, working out of headquarters in St. John’s, a position came up in the police dog unit in Corner Brook.

“I was willing to go anywhere to get the job. It didn’t matter to me where it was. I knew it was what I wanted to do.”

Being a dog handler is much more than a job or a career, Ryan said. It’s a lifestyle.

“We have our dogs with us 24-7 and 365 days of the year … We spend all our working time with them and they live with us at home on our property. Biff’s kennel is more like a garage. It’s amazing,” Ryan said.

On days off, Ryan and Biff would be out exercising and training.

Biff began spending short periods of time in Ryan’s home at about age five. By age six, he was living with the family, where he continued to work as a police service dog until his retirement.

“He transitioned into a beautiful pet … I have a young child at home and they were the best of buddies. He was a gentle giant. She loved him.”

A full profile police service dog, Biff was trained in everything from illegal narcotic detection to tracking, from searching for people or evidence to obedience and agility.

“Police dogs have to go places that pet dogs don’t want to go,” Ryan said, such as into attics and in confined spaces on vessels.

Over his career, Biff located hundreds of thousands of dollars of illegal drugs and was involved in hundreds of calls for service that helped in investigations and led to arrests, Ryan said.

Searching for vulnerable people was among the most rewarding calls, he said.

Ryan spoke of one such call involving a young child missing in the woods.

“We were able to find him after several hours. That was very rewarding,” he said.

Biff was eight years old when he retired in 2017.

“I knew I wanted to give him a good retirement … I knew I was keeping him as a pet when he retired … I would never have been able to give him up,” Ryan said.

Ryan is now on the job with his new partner, Avalon. They hit the streets in 2017.

“I had Avalon for about two months before we went away for training. When we came back, Avalon was a full-time working dog and Biff was retired at home,” he says.

One of the toughest parts of transitioning from Biff to Avalon was when the time came to head to work, Ryan said.

“Biff would be up in the window looking at myself and Avalon going to the truck. You could hear him whining inside the house.”

For Ryan, it’s nice to know that Biff and Avalon are from the same bloodline. Like all RNC police service dogs, they are both from the RCMP’s breeding program.