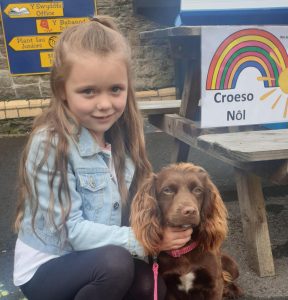 She had missed the smells and sounds of the Carmarthenshire primary and the companionship of pupils.

Rosie – a cocker and springer spaniel mix – is one of two dogs at the school, which has been open as a hub to children of key workers during the coronavirus lockdown.

Her West Highland terrier comrade, Millie, has been on patrol at the school in recent weeks while Rosie was at home.

“She was so excited to be back,” said head teacher Karen Towns.

She said the two dogs have had a calming effect on pupils who understandably felt a bit nervous about the new layout and school day.

A multi-coloured balloon arch has also gone down well.

“You could see some of the children were a bit anxious but as soon as they saw the balloons and the dogs, they relaxed,” said Mrs Towns.

Rosie has led some of the pupils into class.

Like schools everywhere, the rural primary has lots of social distancing signs, hand sanitiser, a zoned yard and outdoor sinks for hand hygiene.

It has 230 pupils on its roll, but Mrs Towns said only 48 per cent of them were attending the current three-week period of learning, with the rest continuing to learn from home.

The staggered timetable means 56 pupils are in school on any given day, plus a further 10 in the care hub.

The first day back was also a big moment for staff.

“We were in early and were really excited,” said Mrs Towns.

She said the school has managed to accommodate sibling and friendship groups, which has been well received by parents.

Teaching staff had been prepared to do four weeks – the original plan for schools in Wales – rather than the re-arranged three-week stint.

“They have been so dedicated and committed,” said Mrs Towns.

Inevitably, things at the school aren’t quite what they were.

Pupils bring in completed health assessment forms every day, and contingency plans are in place if a child or teacher were to show signs of the virus.

Mrs Towns said planning would be needed to help pupils catch up, and that clarity was still lacking on how the September term would look.

“A one-metre social distancing rule would help,” she said.

“Other options include looking at public buildings nearby.”

She added: “But I’m just glad to be back and see the children.”