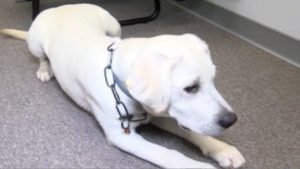 A Labrador puppy was supposed to start his new job as a therapy dog in West Virginia but with no schools open to visit, he’s hanging with his new handler instead.

Buddy is a six-month-old English Lab who is also the newest member of the Tyler County Sheriff’s Office.

As a therapy dog, Buddy has a very special role, he’ll be roaming the halls of the county’s schools to help school resource officers connect with students.

The coronavirus pandemic has shut down schools but Buddy’s new handler says they are making the most of their time by getting to know each other better.

Officials say Buddy will also visit senior centers and other areas as needed.