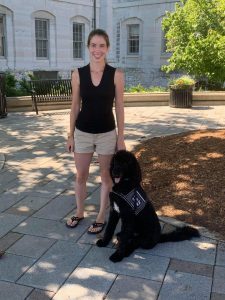 Kingston Secondary School will be getting a new staff member before the end of the 2020-21 school year with the addition of Indie, a black standard poodle.

Indie, working with adolescent care worker Emma-Jane Hamilton, will be the first intervention dog placed within a Limestone District School Board school.

“My job is to support students who might be struggling with things at home, school, friendships, relationships, stress, mental health, those kinds of things,” Hamilton, an adolescent care worker at Kingston Collegiate and soon to be at Kingston Secondary School, said. “So what Indie’s role will be is to enhance the work I’m doing. So if there is a student that’s hesitant to open up or maybe they’re really anxious about coming to talk with me, it’s just another …. well, it’s a little hard to describe.

“It opens doors that you don’t even know need to be opened. Sometimes it’s building that rapport with a student, which might start off with (questions), ‘Oh, have you met Indie? Do you have a dog?’ So it kind of opens up conversations.”

Hamilton has found that having a dog at a school can be a calming presence. She has helped in the training of another dog for a different organization and had them with her at school before.

“It brings (the student) more into the moment as opposed to focusing on the stress or worries or whatever kind of brought them down to me,” Hamilton said. “One thing I love about having a dog at school is it helps reduce stigma. So, I can be in the hallway talking to students of all different grades, different social status, so to speak, and it’s not seen as, ‘Oh, you’re talking to the school counsellor in the hallway.’ It’s just students are talking with me. It makes it OK to be seen talking with me.”

“Ability Dogs Canada is an organization that specializes in training service dogs,” Hamilton said. “Right now, (Indie) is training five hours a day, seven days a week. It’s getting her exposed to different situations, sounds, (and) smells. Getting her used to being in public, interacting with people and staying calm in situations.”

To receive an intervention dog designation, a dog must pass a number of training certifications, with training starting from the time it is a puppy to over a year old.

“We train service dogs as well as intervention dogs,” Samantha Cooper, Ability Dogs Canada owner and trainer, said. “They are different. A service dog is trained for a (specific) individual for a medical condition. An intervention dog works with a handler. Now not to confuse that with a therapy dog.”

Cooper has been training dogs for over 20 years, as service dogs, therapy dogs and K9 intervention dogs.

“A therapy dog goes through one course for six hours and gets that stamp of approval,” Cooper said. “An intervention dog works more like a canine crises worker — working in an area where there might be situations where students are difficult to reach emotionally or are going through a crisis — so we have to train these dogs to be really good around all emotions. The dog has two different roles: one is to be a tool in the counsellors/social workers toolbox, then there’s also the comfort part that a dog can provide.”

Due to the COVID-19 pandemic, some of the training Indie needs has been delayed, such as training to deal with crowds and public noises.

“It’s hard because we had to pull all our dogs out of public access back when COVID started,” Cooper said. “Indie has been doing really well, and I am anticipating certification around (spring of 2021).”

Hamilton approached the Limestone board early in 2020 to see if it was interested in having an intervention dog within its schools.

“I had to meet with the board,” Hamilton explained. “I noticed there was something lacking, so I approached the board, through email first, saying, “Would this be something that I could do, apply for my own service/intervention dog to help support the students.”

From there, Hamilton had several meetings to go over the logistics and to get the approval.

“This is something new. It hasn’t been done in our board before,” Hamilton said. “(The board) had to do their due diligence as to what this would look like because she’s not a medical service dog.”

Hamilton then applied through Ability Dogs Canada and was matched with Indie, who has just turned a year old in the middle of November.

Hamilton is hoping Indie will be certified and ready to work at Kingston Secondary School before the end of the 2020-21 school year.

“She’ll be in my office, with me,” Hamilton said. “(Having Indie) doesn’t really change my day-to-day, except in the interactions with students. That’s where (Indie) will have the biggest impact. She’ll be part of the team.”

The cost to raise and train an intervention dog is $18,000, and fundraising is already underway to help make this resource a reality. The cost is not covered by Education Ministry funding.

A GoFundMe crowdfunding campaign has been started to help offset the costs, so far raising over $1,000 of its $2,500 goal.