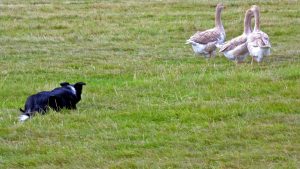 The City of Victoria is searching for a contractor who has experience using trained herding dogs to deter Canada geese from staying in municipal parks.

The city says that the purpose of the job is to discourage geese from returning and creating nesting colonies.

“A trained canine has been the most effective and cost-efficient method to date,” the city says in a request for offers published online.

“The city will look at other control methods available, however as the parks are not an agricultural business, the simplest and most cost-effective method is preferred.”

The work would begin in the spring and last for approximately three years with a possibility of extension once the initial period has passed.

The parks in need of the service include Royal Athletic Park, MacDonald Park, the Holland Point Park area, and Beacon Hill Park, where the bulk of work will be done.

The municipality says that animal handlers must ensure that their herding dogs, or other appropriate animals, are able to deter geese without harming the birds, people or other animals.

The trained dogs must also be able to understand the difference between injured and uninjured geese, so that they are not harassing or harming injured birds.

The city stresses that contractors must be in control of their animals at all times, and that their dogs must be able to work in delicate areas that may have ornamental flowers or displays.

“Contractors will be handling their animals in high-profile public parks and must exhibit professional conduct and be in control of their working animals at all times,” says the city.

Detailed information on the job, including requirements and scope of work, can be found on the City of Victoria’s website.