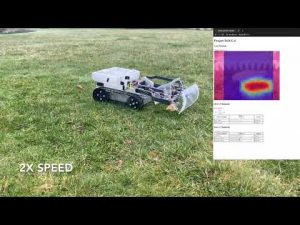 D.O.G.S.: A Robotic Solution for Dog Waste Collection in a Service Dog Facility

Collins partnered with The Service Dog Project, a service dog training facility in Ipswich, Mass., to develop a robot that is able to collect dog waste in a portion of the facility that is often used for dog training and exercise. His “Device fOr Gathering Stool” (D.O.G.S.) is a rover designed to move around the rough terrain of the facility, and includes a large scoop to collect waste and a payload base to store it. Collins also built a basic control system that uses an onboard Raspberry Pi computer to allow an operator to control the rover remotely. In addition, Collins showed how his rover could be made autonomous with the use of additional software and by fitting a camera and thermal imaging sensor to the rover. For Collins, the biggest challenge of the project was limiting the scope so he could realistically finish his work within the ES 100 time frame.

“I learned a great deal from this project. The project had a lot of electronic and software components that I didn’t have experience with. I had never built a robotic system like this from the ground up, so I had to do a lot of research and learn new things along the way,” he said. “In addition, the project was a great learning experience in project management and how to set realistic expectations and break up work into manageable chunks.”