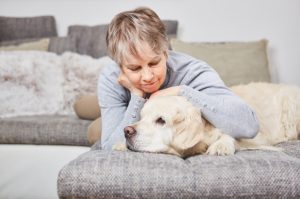 Some senior citizens in Florida who have been isolated due to coronavirus-prompted social distancing measures in the state may soon receive a furry companion — albeit a robotic one.

The Florida Department of Elder Affairs on Monday announced that it began delivering nearly 400 — 375 as of this writing — therapeutic robotic pets to “socially isolated seniors and adults living with Alzheimer’s Disease and Related Dementia (ADRD).”

The agency said the dogs can help combat social isolation and depression among older adults and those with ADRD “by improving overall mood and quality of life.”

“Family caregivers may experience a reduction in stress, and caregivers benefit when companion pets allow increased engagement with the older adult and their environment,” it added.

Global pandemic aside, loneliness is not an uncommon problem for middle-aged and older adults. A 2018 survey by the AARP Foundation found that one-third of U.S. adults age 45 and older reported feeling lonely. The foundation said at the time that number will likely increase as the number of aging adults in the country continues to rise. Additionally, more than 20 percent of people 60 or older suffer from a mental or neurological disorder, including dementia, according to a 2017 report from the World Health Organization.

“We know social isolation disproportionately affects older adults, and COVID-19 has required people with dementia and their caregivers to remain alone for extended periods of time,” said Department of Elder Affairs Secretary Richard Prudom, in a statement.

Robotic pets are an alternative to traditional pet therapy, but “research shows they have similar positive effects,” as per the Florida Department of Elder Affairs.

“They are designed to respond to motion, touch, and sound. Robotic cats and dogs are usually given to people with ADRD, but data has shown that using pets to decrease social isolation for older adults is highly successful,” the news release reads.

The robotic dogs were created by Ageless Innovation, a company that develops “fun and engaging” products for older adults.

“We look forward to delivering these therapeutic robotic pets to those who will benefit from their companionship,” added Prudom.