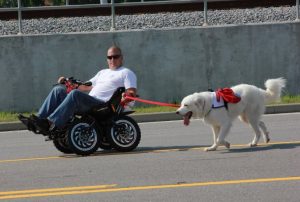 A local mobility service animal and his military family hope their community will help them beat out several other canines to win a coveted national award.

S.D. Gunner, who has assisted Army veteran and Richmond Hill resident Sgt. Hamilton Kinard since June 2013, is up for an American Humane Hero Dog Award.

The award is all about recognizing “hero dogs” — ordinary canines doing extraordinary things, according to American Humane’s website.

The 7-year-old Great Pyrenees is nominated in the service dog category, one of the annual competition’s seven award groups, which also include law enforcement, therapy and shelter dogs.

“Gunner has been nominated in the past, but we’ve never made it past the first round because it’s based solely off of individual voting,” Britnee Kinard, president and founder of the S.D. Gunner Fund, told WSAV.com NOW.

American Humane reached out to the Kinards this year to let them know their devoted service dog would have yet another shot at winning.

Brittnee says since Gunner’s life expectancy is only 10 years, she and her husband, Hamilton, decided they would move forward with participating.

The service dog’s work with Hamilton over the past seven years helped him get nominated.

Hamilton had returned from combat abroad with no less than 56 injuries, including a severe traumatic brain injury.

“We got Gunner after the Department of Veterans Affairs determined that my husband needed a mobility service animal to help him get around,” Britnee said.

“At that point in time, he was using a wheelchair and a couple of other mobility devices, and they felt that Gunner would be of great usage towards him,” she said.

Nearly a decade later, the large and furry white dog has grown not only in size — but into an integral part of the Kinard family.

Britnee adds that it’s nearly impossible to go anywhere with Gunner without being recognized.

“It’s not Blayne’s mom, Maks’ mom, the Kinards, it’s ‘hey, you’re the people with the big, white dog,’” she shared. “We don’t go anywhere without him, he literally does everything we do, and I don’t think we ever want to think about the day that he won’t be here.”

Gunner inspired Britnee to start the SD Gunner Fund in 2014.

It serves to help veterans and disabled children with the financial expenses of owning much-needed service animals.

Through the Fund, they also train and provide service dogs to those that need them.

“As an organization, [Gunner] represents so much,” Britnee said.

“We’ve probably assisted somewhere around 10,000 children and families in the Lowcountry, working with pediatric facilities, hospitals, school systems and working individually,” she said, adding, “Yes, he’s our service dog, but he does so much more than that.”

Gunner’s owners say their service animal, which was the first Great Pyrenees ever to win the American Kennel Club’s Humane Fund Awards for Canine Excellence, has broken a lot of barriers for his breed.

“He’s not a lab, he’s not a golden retriever, he’s not a standard dog that you would see as a service dog,” Britnee said.

“When we first got started, there were so many people that told us a Great Pyrenees could not be a service dog because they’re difficult, they’re stubborn, they’re hard-headed,” she added.

“To my knowledge, he would be the first Great Pyrenees to win [the service dog] category,” she said.

Votes for the first round can be submitted through May 7, 2020, and the Kinards will find out toward the end of summer if Gunner has won his category.

The winners’ award ceremony will be held in Hollywood in September.