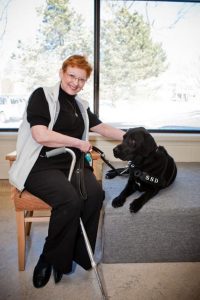 If the past three months without a service dog have been a challenge for Ann Moxley, the next year seems poised to be a struggle.

The Victoria resident, who lives with physical disabilities, used to rely on her faithful companion Gretzky for a variety of household tasks. She fondly recalls times when Gretzky would pick up a wallet that slipped from her pocket or retrieve a toque and mittens blown into the road by a gust of wind.

But Moxley has been without his support since his death from a rare liver condition in April. And since the COVID-19 pandemic has caused Canada’s service dog training schools to halt or suspend their programs, she isn’t scheduled to meet his successor until at least July 2021.

“It’s hard, it’s all I can do to exist,” Moxley said in an interview. “It’s incredibly lonely.”

Moxley plans to get her new companion from Lions Foundation of Canada Dog Guides, a school based in Oakville, Ont., that trains service animals to support people with a range of physical and sensory disabilities.

She said while dogs have been successfully placed in foster homes while classes are on-hold, addressing the needs of their future human partners has proven much more complex.

“Clients are a different story,” Crandell said. “… They have been put on hold.”

Figures provided by the school estimate approximately 80 disabled Canadians have had their training deferred due to the pandemic. Officials said the school is offering virtual support to its existing clients and looks forward to the day when it can “create more life-changing matches for people with disabilities.”

Pandemic-related setbacks also abound at Canadian Guide Dogs for the Blind, an Ottawa-area training facility that cancelled all in-person classes at the end of March when public health-related lockdowns took effect across the country.

Manager of Development Alex Ivic said the school has had to explore alternatives to replace the residential model at the heart of its usual training program. Local clients, for instance, began receiving home-based training in May.

Ivic said the campus reopened to students last month, though only one person at a time is allowed to occupy the residence.

“The pandemic gave us new challenges,” Ivic said. “We had to push everything back and the wait times for those waiting for a dog are variable.”

Moxley anticipates additional struggles when she’s finally cleared to train with a new dog, saying COVID-19-related restrictions make the prospect of travelling from Victoria to Oakville daunting and possibly risky.

Canada’s service animal training schools don’t generally receive government support, relying instead on charitable donations to stay afloat. Both the Lions school and Canadian Guide Dogs for the blind said the financial squeeze caused by the pandemic adds another dimension to their struggles to keep going during a time of upheaval.

But Ivic, for one, remains optimistic, saying schools are committed to matching successful service dog teams while preserving the health of all concerned.

“I hope things will go back to normal one day to train multiple clients at once,” he said. “I know there will be changes in our protocols to keep people safe,” Ivic said.