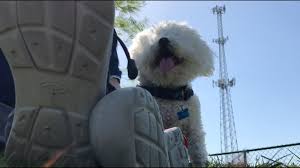 Paul Rocha and his service dog, Comet, are best friends and have been inseparable since Rocha received him almost 13 years ago to be his service dog and help him get through his day to day.

The routine is much the same every day for the two best friends who live in Temple in a small one bedroom apartment, but last Friday was anything but routine following a vicious attack, unprovoked and one that Paul didn’t see coming.

“I noticed in the parking lot area there was a running truck,” he told me Thursday afternoon, Comet sleeping close by on the couch. “I didn’t think anyone was in it.”

Rocha said he was taking Comet out for a walk and to use the bathroom, it wasn’t too hot yet, so he decided to keep Comet outside a little longer and allowed him to sniff around and take his time.

“There was a car, a space and a truck,” he told me, remembering the scene as he began to take Comet back inside the cool apartment. “I remember there being a lot of barking and these dogs, with their paws, hit the button and lowered the window and jumped out.”

Rocha said he tried to pull Comet away but his collar broke off and as he tried to get it back on him, both dogs attacked.

“They were circling around like wolves,” he said. “The pitbull mix just started biting Comet and I did everything I could to save him.”

Paul said he struck the pitbull three times in the skull, whacking the dog as hard as he could in an emotional rage he could only compare to wartime in Desert Storm.

“He’s saved my life many times, I have PTSD and I’m a diabetic,” he explained, choking on his words. “Excuse me, I’m sorry, I get emotional.”

Paul said the very thought of losing his best friend is unbearable and he’s angry at the man responsible who gathered his dogs and ran away. A man of God, Paul knows that the young man was probably scared and said he couldn’t be more than 20-something years old.

Comet was left with multiple puncture wounds that, he said, were not stitched up but will heal on their own. The unexpected vet bill was $210 and while he said money isn’t what he’s after from the man responsible, an apology is.

Rocha said he believes someone in the apartment community he lives in is protecting him and he’s asking around every change he can get. He remembers the truck he drives and knows what he looks like. At the same time he’s angry, Rocha said he can and will find room in his heart to forgive the man responsible but not without an apology. “Be a man and come tell me you’re sorry,” he said. “Don’t be a coward and just run away.”

Until then, and even if that day never comes, he is focused now on making sure Comet heals physically from his injuries. He admits the mental anguish for his best friend won’t probably go away for a long time.

“Wounds will heal, it’s the emotional part of being attacked. But we’ll do okay, we’ll get through it.