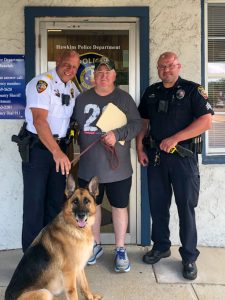 Celeste, a service dog, came into a perilous situation when her owner died and suddenly she had no one to care for her and nowhere to go.

She was on the verge of being put down when, as fate had it, Martin Vallance, a veteran who served in the Desert Storm operation of 1991, was connected to Celeste via social media and was chosen to adopt her.

In a post made by the Hawkins police department, the page announced:

“Celeste (the dog) was a loyal therapy dog for many years and her owner passed away. The family members of the owner were not able to keep Celeste and she was going to have to be put down. Y’all know we can’t stand for that but with this page we were able to get in contact with Mr. Vallance, a disabled veteran that needed a therapy dog. Now Mr. Vallance has a new companion and Celeste has a new fur-ever home. We might have a little extra dog hair around the PD and will probably have jealous dogs when we get home but together we can make Hawkins a great place.”

According to Vallance, the chief of Hawkins started an animal rescue shelter, and had posted about Celeste on the Hawkins Texas Animal Shelter Facebook page. Vallance saw the post and knew he needed Celeste in his life.

“I saw the post and told him I was a disabled vet with PTSD and I would like to have the dog,” Vallance said. “He called me back and asked me a few questions to make sure he was going to a good home. A lot of my friends from church were telling him, ‘Martin needs a therapy dog,’ so that’s why he made the decision. A lot of people had seen the post and wanted her.”

During Vallance’s service, he survived a missile explosion that killed many of his friends and fellow soldiers. The experience brought upon PTSD, and since the COVID-19 pandemic has struck, his state had worsened, he explained.

“The biggest thing that happened to me is a gun missile hit a building and killed 28 of my friends. I was one that survived, I was outside and they were inside. My friends know I struggle with it. Celeste is a blessing.”

Vallance explained that if he has a nightmare, Celeste can wake him up and comfort him.

“Just having her around for less than 24 hours, we made an instant connection. Everywhere I go she goes and that’s a comfort. It was a God thing. I was at the point I needed to do something. I do therapy twice a week and this pandemic does not help at all. I saved her and she saved me.”

He went on to share that Celeste is very easy to love, and very in tune with his emotions. When he is feeling down, she can sense it and will go to him with a gesture of affection.

”She’s lovable,” he said. “She will come and just put her face in my lap — dogs can tell emotions and stuff like that and she’s real good at that.”

After receiving the opportunity to adopt Celeste, Vallance expressed his gratitude for the Hawkins Police Department, his wife, his friends and his church community who he said have been a great support system.

“I’m grateful to the police department and my friends who helped me get Celeste,” said Vallance. “I’ve also been going to Summit Heights Fellowship for 14 years, the men’s ministry is really here to help people. I wouldn’t be here without the church and my wife.”