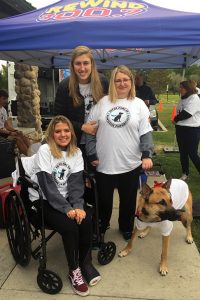 Middle school can be tough for anyone, but it was particularly challenging for Tabitha Bell. Muscular dystrophy had weakened her muscles to the point that it was challenging to walk at school without the help of friends. Sometimes they’d leave her standing next to a post and run off without her.

“When I tried to walk a few steps, I would just fall,” she says. “People really didn’t notice when I would be missing for a while.”

By the time she was in eighth grade, she’d had a spinal fusion and two orthopedic surgeries to help her walk. But the muscles in her feet had atrophied so much that she could only walk on the sides of her feet, which was “super painful.” She would lose her balance when trying to use a cane, walker, or crutches.

“My parents and I were accepting that I may have to be in a wheelchair soon,” she recalls. “My whole body was just so weak that I couldn’t really take too many steps without anyone’s help.”

Then the family learned about a specific type of service dog: “balance-and-brace” dogs. They invested about $20,000 in a German Shepherd Dog named Sunny who was privately trained for the work.

It took a little time for the two to figure out how to work together. Initially, Tabitha fell a fair bit. Then one day, she stepped off a curb without needing to grasp her mother’s hand. At her next doctor’s appointment, she walked—barefoot—down the long hallways at the hospital to the amazement of her orthopedic surgeon. “He was calling out all of his colleagues and he’s like, ‘Look at her! She used to not be able to walk with shoes on by herself!’ I was walking with Sunny, but I wasn’t having another human helping me.”

Thinking of his other patients, the excited doctor asked how much it would cost to buy and train a service dog. When she told him, he deflated, saying none of his clients would be able to afford it because of their steep medical bills, and health insurance doesn’t cover service dogs.

“That got me thinking,” Tabitha says. Work toward the organization’s first placement started after Tabitha’s surgeon mentioned a girl her age with a soft bone disease who could benefit from a service dog. Tabitha and her friend Morgan Kane organized fundraisers at their school. AT&T matched half the funding for a dog, a Labrador Retriever named Atty. It was a resounding success. “Now she’s walking and not in a wheelchair anymore,” Tabitha says.

Since then, by hosting fundraisers like concerts and fun runs, Pawsitive Pawsibilities has raised over $130,000 to purchase, train, and donate dogs to people with disabilities, ranging from a young military veteran with PTSD to a girl who needed a hearing-   assistance dog and a first grader with a diabetic-alert dog.

“It’s really amazing to see how they get their life back,” she says. A key aspect of Pawsitive Pawsibilities is engaging children in fundraising through the program “Puppy Paws.” Tabitha’s pediatrician mentioned that for birthdays and holidays, her children ask for donations rather than gifts; if they host a lemonade stand or bake sale, it’s for charity. Inspired by that concept, Tabitha developed ways for Pawsitive Pawsibilities to offer online and in-person support at schools to help kids fundraise with bake sales, lemonade stands, and garage sales. While helping a child get a service dog, the students learn about the role of service dogs and the joy of giving back.

In one instance, a second-grade classroom in Idaho held a “Pennies for Paws” fundraiser and donated over $200 in pennies to the organization to help a first grader get a diabetic-alert dog named Curly.

“They got to Facetime with the little girl and got to see pictures and videos of when the dog was working with her,” she said. “It was really great to connect them with that. … And it’s really fun because they all love dogs.”

Now Tabitha is 19 and studying to become a child psychologist at University of California, Berkeley. She volunteers at an elementary school with her new service dog, Nox, another German Shepherd Dog. (Sunny is retired and “living the good life” at home with her parents.)

She and Nox are a hit at the school. Many teachers create “Puppy Paws” projects in their classrooms, so Tabitha brings Pawsitive Pawsibilities coloring books, a banner students can write on, T-shirts, little notebooks to track their transactions, and receipt books so if they receive a donation, they can send it to Tabitha and she’ll generate an official tax receipt. “They can learn about what service dogs are, but also learn about what service is and what giving back to the community is in a fun way,” she says. “We try to make it as fun as possible for them.”

Tabitha said she’s grateful to her mother, Jennifer, for helping her with Pawsitive Pawsibilities—particularly with finances, since she’s an accountant. Naturally, her mother is incredibly proud of her.

“My daughter inspires me every day,” she says. “It is humbling.” Tabitha also inspired her high school. When her private school wouldn’t allow her to return for ninth grade with a “pet”—despite the fact that service dogs like Sunny are legally permitted at schools and other public places under the Americans with Disabilities Act (ADA)—the family opted not to fight it. They moved to Salt Lake City where Tabitha’s high school campus was huge. But she gradually built the strength to cross it with Sunny by her side.

“She and Sunny had a huge impact on her high school,” Jennifer says. “Watching her learn to use a dog and watching the dog work, watching him get something off a printer … it became obvious that life was different for her with Sunny than before she had Sunny.”

Rick Reigle, DPT, physical therapist with Neuroworx, a physical therapy organization in Salt Lake City, started working with Tabitha when she was about 15 years old. He helped her learn to work with Sunny to avoid obstacles like curbs and cracks in the sidewalk. Later, when she was preparing to leave the state for college and to get her own apartment, they practiced how to use Nox to help get off the floor if she fell alone at home.

He’s been impressed with how balance-and-brace dogs like Sunny and Nox can assist people with disabilities, and with the positive impact Tabitha had on the community—especially helping young adults with spinal-cord injuries get custom-trained service dogs through Pawsitive Pawsibilities.

Ty Brown, owner of Ty the Dog Guy, a dog-training company based in Salt Lake City, trained Nox as well as many of the service dogs placed by Pawsitive Pawsibilities. Typically, the dogs are about 18 months old and were bred for agility or conformation shows but didn’t quite show champion potential, so they arrive healthy and well-trained in obedience. The dogs live in a home with Brown or someone on his team during training that’s customized to the needs of their future handler.

“Working with an organization like Pawsitive Pawsibilities is really cool,” he says. “They find some amazing people that need real help, and it’s really neat to be able to have this overall experience with a lot of the folks that we’re working with.”

He also enjoys working with the dogs themselves, since they each learn such different skills, whether detecting blood-sugar fluctuations, assisting during panic attacks, or bracing to help with mobility.

“Pigs are smarter and monkeys are smarter. Cats are easier to live with. But there’s something so unbelievably incredible about the dog,” he says. “The amazing capacity they have for learning, combined with that desire they have for bonding with humans. … It’s so darn cool to have one creature that can do all these different amazing things and just love doing it.” Brown hopes his four young daughters will be like Tabitha when they’re older. “Tabitha really is a dynamo,” he says. “From a young age, she realized she had a lot to give to the world. I’ve never seen somebody work so tirelessly while also dealing with her own challenges to just selflessly create scenarios where she can raise money and get service dogs for people. It’s awesome.”