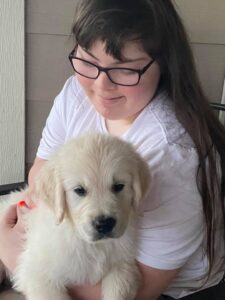 We have all heard the phrase “man’s best friend” when referring to a dog. But when a dog is a special partner for a special needs child, the bond goes beyond friendship.

“Blade” is an English Crème Golden Retriever, adopted at the age of 6 weeks by the Bovaird family last March. The family’s 16-year-old daughter, Katelynn, has Down syndrome and Blade was in training to be her new service dog.

At the end of November, the Bovaird family moved from Cibolo to the Westfield Ranch subdivision off F.M. 775 near La Vernia. During the moving and unpacking Nov. 28, a heavy rainstorm hit La Vernia and scared Blade. He got out of their new home and has not been seen since.

The Bovairds have looked everywhere for Blade, to no avail.

Sometimes, animals try to find their way back to familiar territory that used to be their home, so the family has taken as many as three trips a day back to Cibolo to try to retrace Blades’ steps, in case he tried to run back to their old house. They’ve spoken with some former neighbors in Cibolo to see if perhaps the pup has shown up in someone’s back yard.

He’s friendly and was frightened, so perhaps someone took him in and is caring for him. His collar could have been lost, perhaps, in his travels.

From the time Blade — now 9 months old — was adopted, the pup has slept with Katelynn and has been in training as her new service dog. Her other service dog unexpectedly passed away from bloat several weeks ago, which devastated the family — especially Katelynn. With Blade’s disappearance, Katelynn asks her mother, Pamela, each day where he is, and if he’s in heaven with their other dog.

Pamela said Katelynn cries every day and prays for Blade’s safe return. She is appealing to anyone who may have found the pup, asking them to please return him to Katelynn, who needs him and misses him desperately.

Pamela has put up posters of Blade and flooded social media with photos of him and their story of loss, and placed “lost” ads in the La Vernia News and Wilson County News. One of their new neighbors flew a drone over their neighborhood and nearby areas to see if they could spot him, but had no success.

Blade is creamy white, with long, wavy fur on his back; he weighs 75 pounds. At the time of his disappearance, he was wearing a collar and tags bearing his family’s name and phone number.

The family’s new home in Westfield Ranch is close to Legacy Ranch on F.M. 775.

If you happen to see a white dog with long, wavy hair, please contact the family and help make a Christmas reunion happen for Katelynn and her beloved service dog.