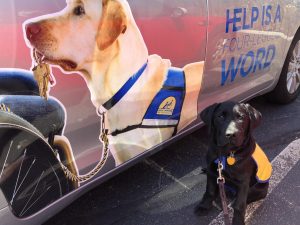 In March, Belmont resident Jane Slavin’s second dervice dog-in-training, Hershey, was placed as a Veteran Service Dog in the Boston area through Canine Companions for Independence (CCI). Slavin’s first CCI puppy, Galya, was placed in 2015 as a Facility dog at Gaylord Specialty Hospital in Connecticut.

Eight-week-old Hershey, a Labrador Retriever, arrived in Belmont in February 2018. A puppy raiser’s responsibility is to oversee the complete care of the puppy: feeding, grooming, socialization, basic manners, exercise, and veterinary care. Puppy Raisers teach the puppies 30 commands and get them used to wearing the “Gentle Leader” head collar which functions very much like a halter on a horse.

After 18 months with the Slavins, Hershey went to New York to complete CCI’s six to nine month advanced training program. In addition to standard Service Dog skills which include opening drawers and doors, retrieving items, pulling a wheelchair, and turning on and off lights, etc., Hershey was also given specialized training to assist a Veteran with Post Traumatic Stress Disorder (PTSD). This additional training included anxiety and nightmare interruption as well as learning to support his handler in crowded public situations.

Slavin is especially thrilled with Hershey’s placement because he had been volunteering at the VA in Bedford for several months and her father was a very proud World War II Ranger.