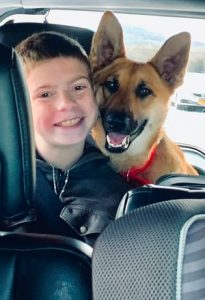 When Remington Lewis rides the bus to Walton Middle School in DeFuniak Springs on Wednesday, he won’t be alone.

This time, next to the sixth-grader will be his best friend Willow, a 1-year-old German shepherd.

The Daily News ran an article in July about the Lewis family’s fundraiser to pay for Willow’s training as a service dog. Remington, who his family calls Remi, needs a service dog to help protect himself and others during outbursts.

Remi, now 11, was diagnosed with attention deficit hyperactivity disorder at age 5, and has been prescribed a long list of medications and diagnosed with a slew of other illnesses that cause behavioral issues. Among them are disruptive mood regulation disorder, bipolar disorder, depression and anxiety.

The GoFundMe campaign raised enough money — and then some — to certify Willow, said Remington’s mother, Rachel Lewis. Willow started training this summer and recently passed all of her certifications.

“He has been waiting for this day,” Lewis said of her son. “He’s been telling his friends. He calls her his baby girl. He says that his baby girl is gonna be with him. He’s just really happy that she’s going to be with him.”

Willow underwent service dog training with trainer Chase Shankle at Total Dog Training. Shankle really knows what he is doing, Lewis said. “The past three months we’ve been able to take her out in public everywhere we go — restaurants, football games — wherever we go,” Lewis said. “We’ve never had any issues. She’s more behaved than any of my children, so I don’t mind taking her.”

The training is extensive, Lewis said. While Willow knows basic commands, such as sit and stay, she now also knows more in-depth commands.

“She can place, which is a placemat we use,” Lewis said. “If I tell her to place, she will not get off that mat. She doesn’t jump up or try to engage with anybody. Somebody can look up and whistle at her, she’s not moving. We do have a pact that says, ‘Don’t touch,’ but that’s up to Remington.”

Willow also is training to block an exit if Remi tries to leave the room.

Remi and Willow have had a special connection from the beginning, Lewis explained in her first interview with the Daily News.

“From day one she slept in his room,” Lewis said. “She was supposed to be my dog, really. She’s always been more with Remington. He feeds and waters her. He always puts her outside. She sleeps with him or next to him. She’s never slept anywhere in the house except next to Remington.”

Their bond is still strong. Remi’s behavioral issues have been better lately; he has had only one major behavioral episode, Lewis said. He had to be sedated.

“When he woke up, he was asking for Willow,” Lewis said.

They had a first birthday party for Willow in October.

The school faculty has embraced the service dog and held an assembly to inform the other students.

“The assistant principal said, ‘Any time (Remi) is having a bad day, honestly all I have to do is start talking about Willow and he opens right up and then we’ll get talking about what happened to make him upset and it’s just a lot easier,’” Lewis said. “When we bring her up is when he starts talking.”

Lewis said she wants to thank the people who contributed to the fundraiser.

“Even when I stated we had enough money, people just kept donating,” she said. “So we do have extra funds available if we need anything for Remington and her. For school, I had to get her another kennel, placemat and vest. We’re extremely grateful. I can’t say that enough, really.”