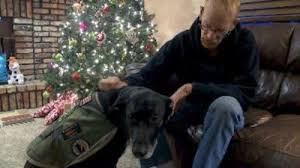 You’ve probably heard the saying ‘A dog is man’s best friend’, but for Marc Abels his dog Ace is a medical necessity.

“Marc has trained Ace to not only be a diabetic alert, he is also a heart attack alert and a PTSD alert,” Marc’s wife Barb Abels said.

Ace has only been a member of the Abel family for about three years. Barb said it took a lot of work for the family to get Marc the help he needed. After serving in the United States Marine Corps for nearly a decade, Marc was diagnosed with Post Traumatic Stress Disorder (PTSD).

According to the Department of Veterans Affairs (VA), up to 20 percent of veterans who serve in Iraq and Afghanistan return home with (PTSD.)

“He started going through a rough mental period and it finally got to a point where I said you’ve got one of two choices; you can get a service dog or get divorced,” Abels said.

According to the VA the service dogs must be certified by Assistance Dogs International (ADI) or International Guide Dog Federation (IGD) to qualify for those benefits.

Barb said that wasn’t something the family could wait for, so they reached out to Javelan, a non-profit that trains veterans how to train their own service dogs to meet their medical needs.

Barb said the Javelan program teaches veterans in a way that will give them the skills they need to train their next service animal after their dog retires or passes away.

Danielle Owens is a veteran that went through the Javelan training program with her dog Kelty, and now works with other veterans to train their service dogs.

“Task training is the essential part of what a service dog does for an individual with a disability. Typically we train dogs for PTSD, seizure alert, diabetic alert dogs,” Owens said. “Everything you think that you might need a dog to mediate a disability for, typically we can train a dog for that.”

According to the Americans with Disabilities Act, service dogs are not required to get a certification or take a test proving they can do the job they were trained to do for their owners.

Ace’s training took the family about nine months to complete, but Barb said the extra work has made a huge difference in her husband’s life.

“Ace truly gave me my husband back,” Abels said.

Nebraska Congresswoman Deb Fisher has reintroduced the PAWS Act of 2019. A bill that would require the Department of Veterans Afford to provide veterans with PTSD a $25,000 voucher to cover the cost of obtaining a service dog.