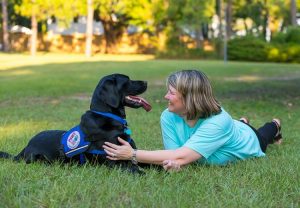 Some children are afraid of the dark, but darkness in complete silence is especially frightening. Just ask Annie. When she was a child, Annie would often sleep on the floor just to feel the vibrations of footsteps, or the opening and closing of windows and doors. Annie would wake up sore from the hard floor, but it made her feel safe.

Annie received her first set of hearing aids at 18 months old. “I received a diagnosis of Usher Syndrome from my eye doctor. This means I was born with a severe to profound hearing loss, and I am gradually losing my peripheral vision,” explained Annie. Still Annie dreamed of going to college and living on her own. Although excited when Annie was accepted to the University of West Florida, her mother was concerned for Annie’s safety. To be honest, Annie was a little scared too. “I was ready to be on my own, and I didn’t want to depend on my parents anymore,” said Annie. “But I had hope that I could live an independent life.”

Since then, Annie has had three Hearing Dogs from PAWS. Her first was Kip, a Terrier mix that was rescued from a shelter in Chicago. Her second was a black Lab named Bubbles who served her beautifully for almost 15 years. Her current dog is Pilot, a black Golden/Lab mix.

Annie shared, “Pilot alerts me to the doorbell, door knock, cell phone, alarm clock, microwave timer, oven timer, carbon monoxide detector, fire alarms, an intruder, and when someone calls my name. This is important because if someone is behind me and needs to get my attention, I rarely hear them.” Pilot alerts her to these sounds at home and in public by nudging Annie with his nose. She asks him, “What?” orally or in sign language, and he brings her to the sound. With an intruder and fire alarm, he has learned to take her to the nearest exit. Pilot also knows his basic commands in sign language.

“When Pilot and I are out in public, I often hear that my Service Dog is better behaved than some children,” said Annie. “I have been in situations in which people were completely unaware that Pilot was under the table until I get up to leave with him. They are amazed at how quiet and well-behaved he is when he’s with me.”

But Pilot does so much more. “Not only has Pilot helped alert me to sounds, he has helped me deal with many of life’s struggles,” explained Annie. “Pilot came when I really needed him.” He was there to support Annie after the deaths of her mother and Bubbles. “Pilot was in mourning with me,” said Annie.

Today, Annie teaches Special Education at Blue Angels Elementary. When she first brought Pilot to work, they were thrilled by how appropriate his name was for the school. They created a special welcome sign for him, featured him on the school news, and printed his image on their Science Olympiad team shirt.

What’s so amazing is that Pilot is bringing joy and comfort to so many more people than just Annie. One of Annie’s students with epilepsy had a seizure in class. After it concluded the student asked for Pilot who rarely leaves Annie’s side. But Pilot went right to her and rested his head on the student’s lap while she recovered from her experience. Annie has a long-standing relationship with PAWS and is so grateful for the Hearing Dogs she has had to help her navigate through life. Her dream of independence was certainly achieved many years ago when she longed to go away to school. Now she has the privilege of teaching young people who have dreams of their own; and, while doing so, she has Pilot by her side.