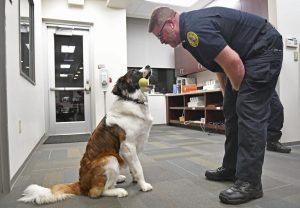 While saving lives, paramedics and EMTs often find themselves providing emotional support to people on their worst days. So when the job is done and they’ve returned to their stations, they may need some comfort as well.

“A lot of times we don’t want anybody to see our weaknesses because we’ve got to remain strong,” said Leah Constantino, one of Indie’s handlers. “With her, you can just be sad, and she’s gonna try to make you feel better.”

Constantino began ruminating on the need for an EMS emotional support dog after the tumultuous year of 2016, which saw the police shooting of Alton Sterling, widespread civil unrest in response, a deadly police ambush and a rare flood event that crippled the city.

Paramedics were at the forefront of each disaster, and some were badly traumatized by the experiences.

Constantino, who has been with EMS for 26 years, said paramedics are accustomed to putting their mental health on the back burner because they have to focus on their jobs. Not coping can manifest in a number of ways, such as developing depression and anxiety.

Indie began on a trial basis in early summer for a little more than a month.

She is now a uniformed officer with EMS. Her call number is Indie 500.

Dogs are great companions for people struggling with Post Traumatic Stress Disorder, according to the U.S. Department of Veterans Affairs.  A recent study by Purdue University’s College of Veterinary Medicine also showed that service dogs helped to “disrupt episodes of anxiety.”

Constantino said Indie takes the emotions paramedics have pushed aside or tamped down and allows them to process.

“We will compartmentalize our emotions on tragic events and do what we’re trained to do, do what’s necessary, and generally it hits us after the call,” she said.

Indie, who Constantino characterizes as smart and caring, will “almost immediately” approach the person who seems to be in the most distress after a bad call. She follows orders quickly, listening to her handlers with rapt attention and focus. Average training for a dog like Indie takes a year, Constantino said.

Ready to respond to paramedics who need comfort during debriefing sessions, Indie lives at EMS headquarters. She has set hours where she needs exercise and sleep, although these are adjusted when she is needed to step in for a paramedic in need — as long as those lost hours are made up later. Her wellbeing is critical, Constantino said.

Indie doesn’t go on calls, but she responds after calls. And she goes on social visits to other stations to boost paramedic morale.

After a recent traumatic call, Indie stepped up to help a paramedic struggling to process the night’s events.

It was late, and Indie was curled up on the floor. The paramedic joined her, lying down and closing her eyes beside the dog.

At some point, the paramedic grew emotional. As if sensing her sadness, Indie immediately picked her head up and rested it on the paramedic’s shoulder.