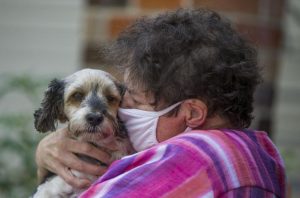 When Barbara Palatin went out to her porch early Sunday and found her service dog Ryder’s leash and harness sitting empty on a chair, she immediately began searching the neighborhood, fearing the worst.

Thanks to the help of two strangers and social media, 72-year-old Palatin was reunited with Ryder on Monday.

Palatin, who lives in the Ironwood Village apartments and is diabetic, said she relies on Ryder — a 12-year-old Biewer Yorkie whom kids in the apartment complex call Bubba — to help alert her when her blood sugar gets out of sync.

Around 2:30 a.m. Sunday morning, Palatin said she was on her porch reading with Ryder when she went inside to use the bathroom.

“I was gone maybe five minutes. When I came out, his harness had been taken off and thrown on the chair and he was gone,” Palatin said. “He’s extraordinary, but he can’t do that.”

Palatin began walking around the apartment complex in the early morning hours on Sunday, changing coats twice because of the rain, hoping Ryder had just gone to the house of a neighbor he knew. She soon filled out a police report, as well.

“We’ve been together since 2008,” Palatin said. “He’s only been gone from me for five days when I had surgery. That’s the only time we’ve been apart, we go everywhere together.”

Palatin’s break in the case came Sunday afternoon when she ran into Tysharae Jones and Jomisha Banks up the street from her house.

“She was crying and shaking when she came up here,” Jones recalled.

Jones and Banks said they had never met Palatin but had seen her walking Ryder many times.

When Palatin asked if either woman had seen her missing dog, they said no, but helped her post a picture of Ryder to a local Facebook group geared toward finding lost pets. Jones said she posted to the page about a cat of hers that went missing a few years ago and had stayed in the group ever since.

Within minutes, someone responded to Jones’ post saying they had almost hit Ryder near the front of the complex at Ewing Avenue and Blossom Drive and had picked him up.

“In less than five minutes, these two wonderful ladies came running down the hill, and they said ‘Is this your dog, is this your dog?’ Palatin remembered. “A lady had sent them a picture of Ryder.”

Though she was relieved to know Ryder was alive, Palatin wasn’t able to get him back until Monday morning because of some unfortunate circumstances.

The woman who replied to the post had dropped Ryder off with the apartment complex’s maintenance manager, who in turn, had taken him to the Humane Society, which required Palatin to gather Ryder’s medical paperwork before retrieving him Monday morning.

Other than a cut on his leg, which Palatin believed was caused by him chewing at it because of an allergic reaction, Ryder appeared to be unharmed.

“I’m a senior citizen, he’s my family,” Palatin said. “Just being away from him, I couldn’t sleep, I couldn’t eat.”

With Ryder back home, Palatin said, she was moved by Jones and Banks’ kindness to help a stranger in a time of need. Jones said she’s just glad Palatin was reunited with her service animal.

“We’re happy for her,” Jones said. “I know she cares about that dog.”